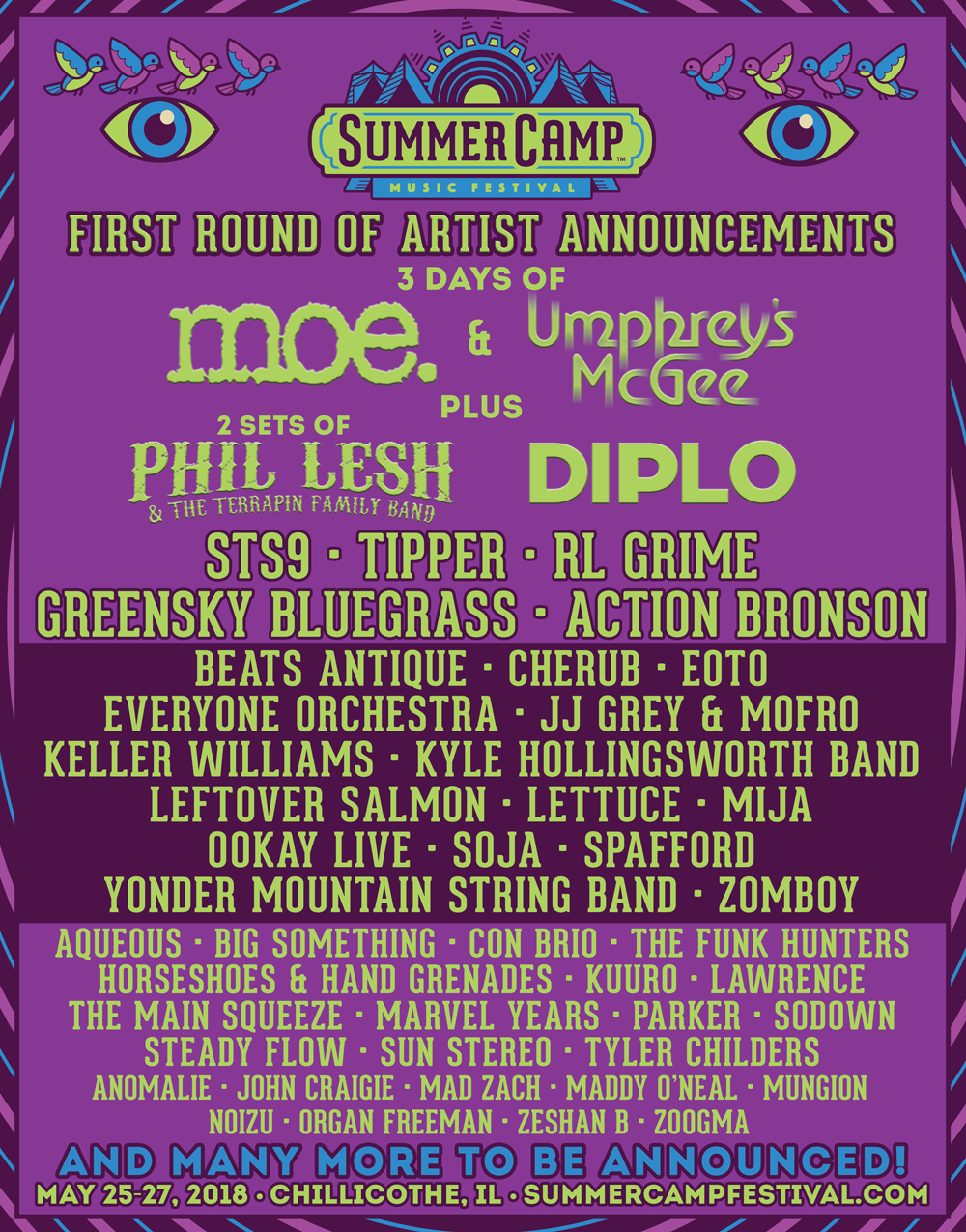 Scampers and music festival goers alike gear up for the always-anticipated annual Summer Camp Music Festival in Three Sisters Park in Chillicothe, IL. Every year Summer Camp is considered home to many, including Moe. and Umphrey’s McGee fans, who are self-titled as “moe.rons” and “umphreaks.” Every year, Moe. and Umphrey’s McGee perform three days of the festival, guaranteeing a weekend full of incredible music. This does not include the stacked lineups as well as other amenities that Summer Camp brings to its fans every year. The beauty of Summer Camp is its ability to provide top tier acts in multiple genres, specifically electronic and jam. This creates a beautiful one-stop shop for many music fans that like to venture into both realms.

Summer Camp Music Festival this year will take place on May 25-27, 2018 in Three Sister’s Park in Chillicothe, IL, and this lineup is the biggest and best yet. This year’s lineup comes heavy with the usual 3 days of Umphrey’s McGee and moe., but also includes headliners such as Phil Lesh & The Terrapin Family Band (2 sets), Diplo, Tipper, RL Grime, STS9, Greensky Bluegrass, and Action Bronson. Tipper is a highly anticipated set for this year. With his massive Okeechobee set and not many other festivals planned for 2018, Tipper fans will be flocking to Three Sisters Park to catch his unworldly sounds and unreal DJing abilities. Also, RL Grime has just announced the finishing of his new album, and this means we will hear some unreleased goodies from the trap OG this year at Summer Camp.

The talent still does not shy away at the lower end of the lineup. Acts such as Opiuo, Keys and Krates, Zomboy, Break Science, Mad Zach, Sodown, and Shlump will be sure to keep the electronic music fans dancing throughout the weekend. Jam fans should be sure to check out bands such as Aqueous, Kung Fu, The Main Squeeze, Tauk, and Backup Planet. These bands will start gaining more recognition this year since they have been performing captivating shows, leaving a fresh amount of new jam for 2018.

This year’s Summer Camp Music Festival, taking place on May 25-27, 2018 is sure to be the biggest and best one yet. We can’t wait to see so many incredible acts in Three Sister’s Park in Chillicothe, IL, and we hope you will join us!

Be sure to grab your GA tickets + VIP Packages for the promising Summer Camp Music Festival below! We can’t wait to see you there!

A little taste of the jams with Disco Biscuits from last year!