Global Dub Festival took over Red Rocks on May 20th for one hell of a night full of deep and heavy bass! Headliner Flux Pavilion, led the event with some raw dubstep but didn’t stick to one genre as he played future bass, deep house, drum and bass, and practically every variation of dubstep. This type of music variety was echoed throughout the supporting acts – an ultimate night! Together with some of the most epic production put together by Global Dance, this event was truly next level. 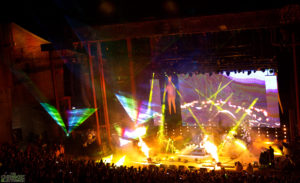 Templo started the day off with his unique psychedelic bass heavy music. Playing at a slower tempo, he ensured that the night was going to be full of bass music. ARMNHMR, an up and coming duo from L.A, produces mainly future bass, but during their 40 minute set, they played out the beautiful future, the dirty dubstep, and the dancy deep house. With a wide variety of music, they got the crowd amped up for the next act, UK Sensation and drum and bass heavyweight, Wilkinson. He brought the faster tempo to Red Rocks with both the liquid and heavy drum and bass, 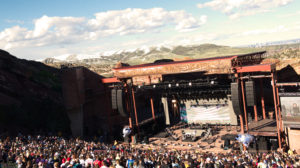 but didn’t stick to that as he played a variety of dubstep and trap, including the classic from a couple years ago, Flosstradamus- Roll Up (Baauer Remix.) Afterwards an up and coming artist got the blood pumping and heart racing, capturing the hearts of many with his clever choice of words, visuals, and absolutely RAUNCHY dubstep! Spag Heddy! He emphasized dubstep throughout his set, sprinkled in trap and masterful mixing, the crowd was head banging from beginning to end. Check out a dank video below! 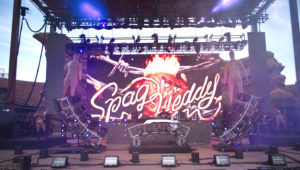 Following that set with even more dubstep goodness, Crizzly. Bringing along his talented MC, Crizzly played out beats and songs that got the crowd even more hyped. Sprinkling in some trap into his performance, Crizzly played out a set that shook the grounds with the feet of the raging crowd. Although, the next artist who came on, Illenium, was one who many were anticipating for the night as he is quickly becoming Colorado’s favorite producer. Moving to Denver a couple years ago for inspiration and motivation in his music, Illenium, is gaining popularity with talented remixes, originals, and sets that stole people’s hearts and made them an instant Illenium fan. Having produced mainly future bass music, his set was beautiful with melodies, harmonies, and beautiful vocals in his music, but, he didn’t stick to just melodic future bass. He threw down the filthy. The Grimey. And most definitely the bass heavy as he played, trap, dubstep, and drum and bass! Check out a small clip of his performance as he played, Get Deaded- Noisia (MOODY GOOD remix)

Ending the bass filled night, was none other than the UK dubstep OG and one of the most iconic producers in the world, Flux Pavilion. He lead us through a crazy musical journey! Flux Pavilion kept the set bass heavy and groovy the entire time, as he can gracefully mix from a melodic dubstep or future bass song to a drum and bass or riddim track. Global Dance  chose an amazing headliner to end out their annual Global Dub Event at Red Rocks. An event of tasteful bass music for sure. Do not miss another Global Dance event, as this one was one for the books! Check out Global Dance Festival, coming July 21 and 22nd to Denver!