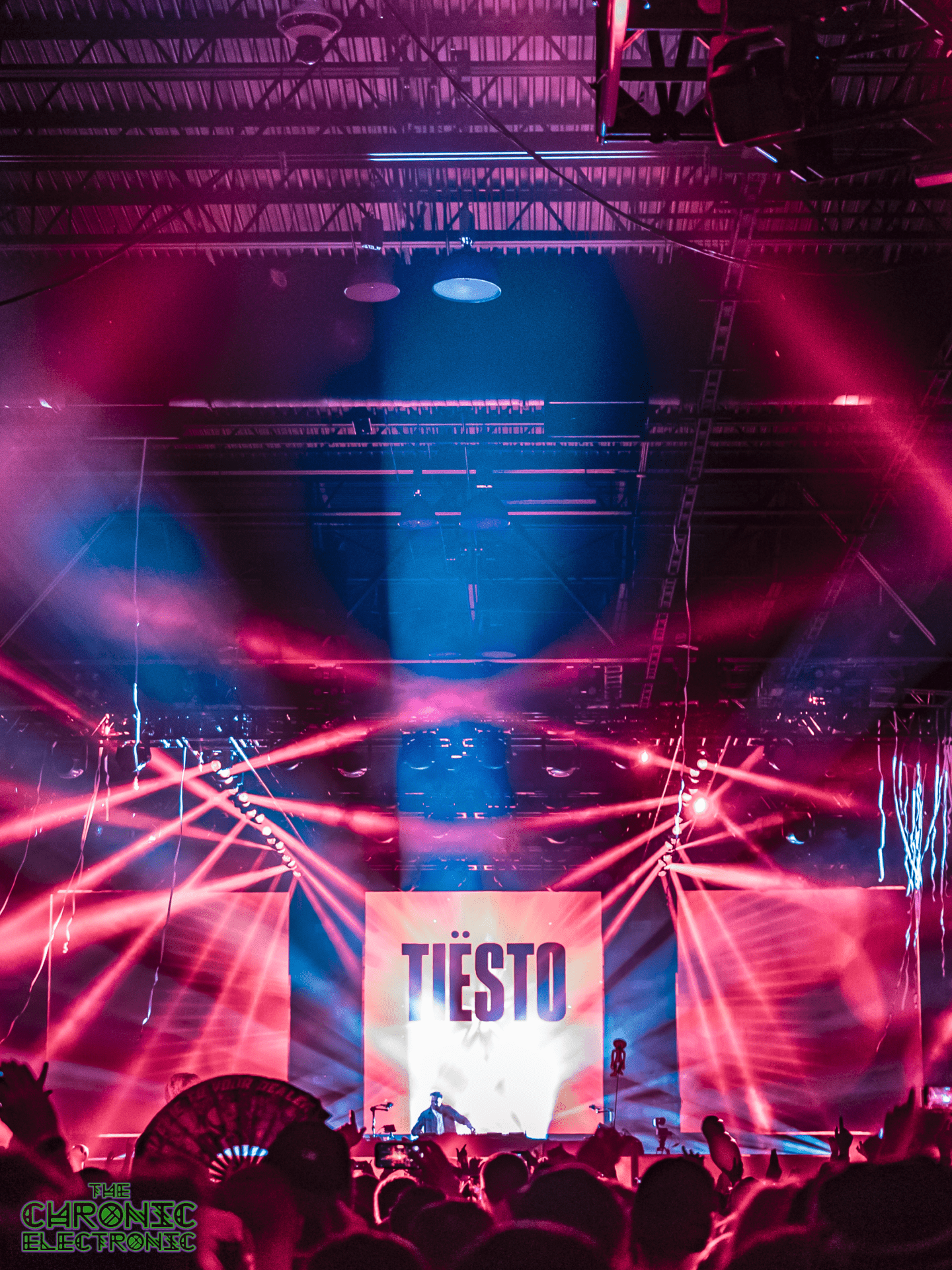 The bass capital brought in the New Year with the biggest NYE Dance celebration, Decadence, hosted by Global Dance.  For the past 9 years they have been taking over the Colorado Convention Center with world-renowned headliners of all types of dance music genres. For this eve of the 2020’s, Decadence went all out with bringing in yet another exquisite year of bass music, feelzy trance, blood pulsing electro, house music, and everything in-between! Of course, with epic music, comes epic production, and the City of Decadence blossomed with bright vibes from both the mind immersing production and the joyous crowd who was there to party and bring in the new year with a bang! Both days this year had a lineup that did not disappoint from start to finish.  The first day started off with bass music superstar, Mersiv, no time for chill, only dank beats. Having this up & coming bass music super star kick off the first night really escalated the vibes as ALL the bass heads came out as early as possible to get their head banging started right. The vibe for the bass heads and wooks did not dissipate after the first set, it only grew as more people flooded into the convention center. It escalated when French bass music producer, CloZee took over. Quite possibly one of the biggest female producers in the scene currently, CloZee rocked the city of Decadence with worldly sounds that broke down into wonky experimental bass. This is when the true festivities of Decadence came to play when the two main stages were started to get jam packed and the headliners were rolling in. After CloZee, Whethan came on to offer some unique styles of future bass that grazed the harder and more pumped up party vibes than other future bass styles. Meanwhile on the other stage Cash Cash lead into one of Denver’s newest residents, Tiesto. Of course Tiesto brought the fire to light up the party! He lit up with his set that covered his classics and classics from musical freedom while mashing in new club bangers and house beats. 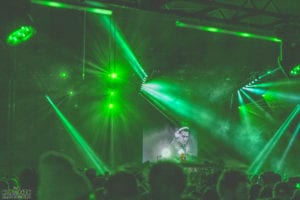 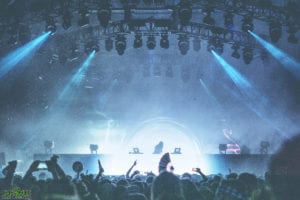 After the legendary set from one of the oldest and most iconic DJ’s in the world, the tides and vibes changed as Bassnectar time grew closer on the Cybernetic Stage. Even with it being his 7th time coming to the wondrous world of Decadence, the anticipation and electrifying energy was never higher. The King of the Sound, Bassnectar brought a heavy hitting Decadence performance with a mind blowing hour and a half that truly flexed the Decadence speakers. For all of you Bassheads out there his setlist is out on reddit, check out the chaos in the music.

ID – ID (The Alkaholiks – The Next Level acapella)

Front to Back – Buku (Bassnectar Remix)

Bassnectar & Jantsen – It’s About To Get Hectic ft. Born I Family Photo

The night of epic music did not end there, it only got better as one of the most anticipated artist collaborations was to take place, Gigantic NGHTMRE, a mashup between Big Gigantic and NGHTMRE was possibly one of the most rocking sets for the attendees of the City of Decadence. The mix of saxophone, heavy wonky bass and feelsy future bass gave a unique set that offered the crowd a different take of EDM. Check out this little clip of the chaos below:


The last set of the night was quite the heavy hitter for bass heads and house heads. On one stage the killer Tchami x Malaa was going off while the Belgian duo Ganja White Night was offering a hectic live performance. Their ability to change up their wonks and their synths is one of a kind and having them end out Decadence and announce their 2 nights at Red Rocks was the perfect way to finish night one. 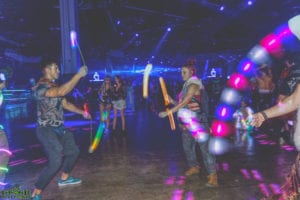 During his performance Fisher was lighting up the other stage and we had caught the ending of his set so we could be apart of ‘Loosin’ it.’ The night really only escalated from here with the ultimate party vibes. From hitting the silent disco and wandering through the LED filled chill areas, Decadence on New Years Eve was the place to be. The room for flow toys was insanely vast and the back of the crowds always had some kind of flow to offer for people who admire flow arts.

One of the highlights from the New Years eve night was the beautiful trance from Gareth Emery that led right into the dark electro feels from one of the biggest names in the scene; Rezz, Canadian & female EDM superstar, Rezz has been noted as one of the most popular and fastest growing DJ acts in the scene by Billboard and has been all over the world growing her ‘Cult of Rezz.’ Even though she has been a must see artist for many over the past couple years, her schedule has never set her up to give her the opportunity of performing during a balldrop… until Decadence. The 2019 Decadence was her first ball drop performance ever and it was straight bonkers!! Playing ‘Life & Death’ into ‘Edge’ gave the ultimate feels of Rezz’s dark and hypnotic music. On top of that, on a personal note, we were happy to change up the ball-drop for our first time in 8 years and experience the ball-drop at the stage on the right, the Evolutionary Stage! Check out her ball drop in a video shot by Derek M. below.

Thankfully after the balldrop there was three more hours of Decadence to rage too! Louis the Child had also done the ball drop on the other stage but catching the last few minutes of that and having that lead into Don Diablo‘s Colorado debut was a vibe unlike any other. This mastermind of future house brought styles of house music that people in this state have never heard before. Mashing up Melbourne with deep house that led into hard-style and back to other genres of house, catching the Don was a treat like no other! 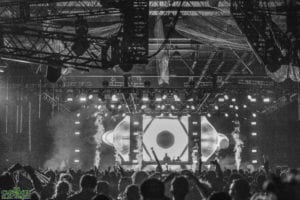 But being in the bass capital, having the boys, Zeds Dead end out the massive event was truly the cherry on-top of the delicious pie. Even though Zeds Dead was late by 30 minutes, and they had a 2am-3am set, we thankfully still got graced with an hour performance with them going from 2:30 to 3:30am. This legendary set was absolutely loaded with killers classics and new bangers from start to finish. They started with ‘In The Beginning’ and led straight into a single off their upcoming album, Bumpy Teeth, produced with Subtronics. At one point in the set they threw down their new remix of Oliver Tree and had that lead into a new unreleased collab with Rezz and it is quite the floor shaker. Check out our video of the dankness below!

Over all, Decadence is never an event to pass up… being in the bass capital there are alot of amazing events that offer epic music, but nothing quite like Decadence. Decadence brings multiple amounts of headlining artists, year in and year out, that is backed with top of the line production in quite possibly the best environment for a massive EDM show like this, the Colorado Convention Center. Capable of holding 40,000 people per day, Decadence truly is the biggest NYE Dance Celebration in North America and if you have a love for EDM and festivals this is the event you need to hit. As an avid festi-head and EDM lover, Decadence will always hold my heart dear as the best celebration for New Years and I am happy to say it was a successful 8th year for me. It is an influencer of the dance music scene and Decadence holds tons of opportunities that can alter your life for the better. Join us next year for their big milestone of number 10! We are sure they will not hold back the slightest. 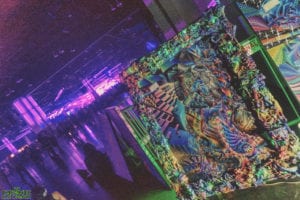