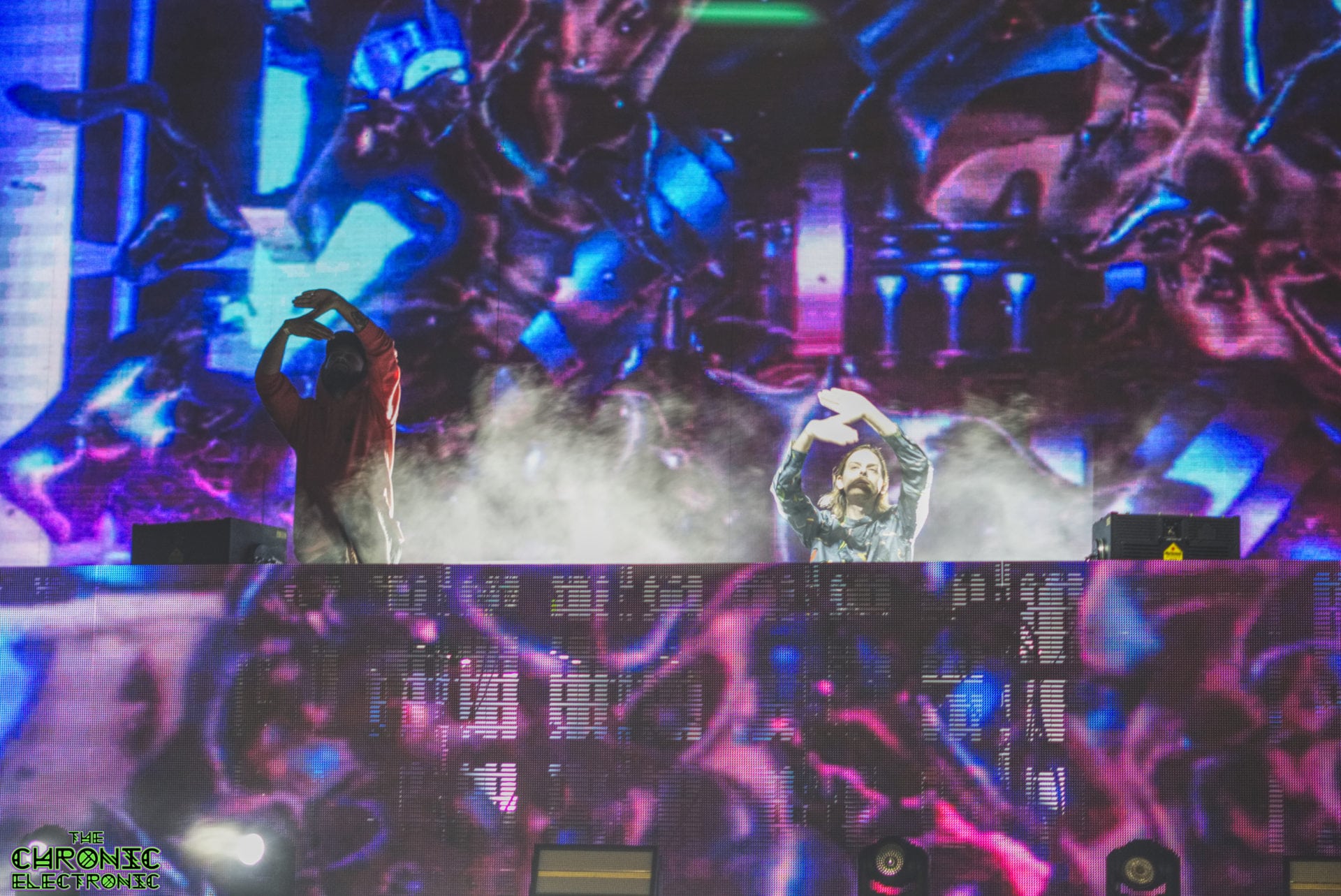 The monumental 5th year of Zeds Dead headlining Red Rocks for their gathering of Deadbeats for Deadrocks V; took place earlier this month and it resulted in 4 nasty shows with thousands of hands that formed Z’s up the air. Two nights at the legendary Red Rocks Amphitheater for thousands to witness, with some of the craziest artists as support followed by two intimate sets at one of Denver’s renowned get-down spots, Gothic Theater. Perfect for the DeadRocks after party fiasco. Four completely raunchy, Zeds Dead’s sets in the bass capital. Here’s what went down:

From start to finish the lineup consists of quality producers that brought the people out early ready to party. This day had a theme of exotic and wonky beats while also flexing the future bass/trap styles of music. One of the acts that kickstarted the day, Psymbionic, threw down an unworldly array of alien-like wobbles backed by some of the best of vibes. 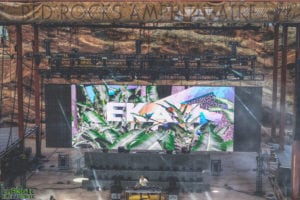 The night began to spiral into future bass and trap style beats with Ekali who took the reins of Red Rocks and rode it deep into nasty and beautiful 808 filled beats. He took us into the dusk period where G Jones brought the storm and “something for your mind.” Literally. Playing with sounds that toggle goofy spots in your brain, G Jones brought the weird to Red Rocks in the most proper way. 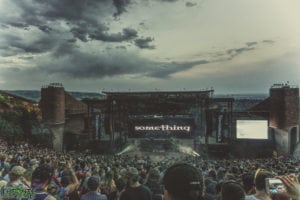 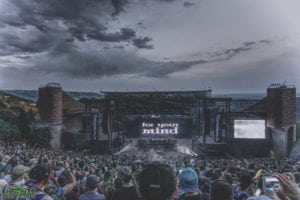 After bringing an electrifying performance to the mile high from G-Jones, a storm had settled after his set break which brought lightning to the area and that delayed the performance but did not cancel it. This night brought us many wonders that brought smiles to all of the ZDF, (Zeds Dead Family.) From playing a wider range of Deadbeats music, 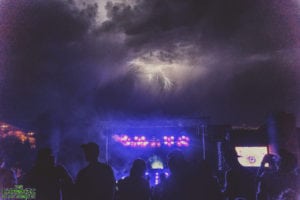 they brought out old school beats, clashed unique songs from up and coming artists, and of course tons of new music, including the debut of a brand new song with DnB heavyweights Delta Heavy, which can be seen below. (Starts off with ‘Zeds Deppelin’ a mash-up that Zeds Dead did of Led Zeppelin‘s”Stairway to Heaven” with DROELOE‘s “Kintsugi.”

That isn’t all though, they had brought out the much anticipated 1000 Volts for a groundbreaking performance for their new collaboration, Consisting of JAYCEEOH and REDMAN from Wu-Tang Clan, 1000 Volts figuratively electrified the stage after the rocking thunderstorm. Night one went up in flames with some of the best pyrotechnics seen at Red Rocks, with flames breaching the banner, the production for Deadrocks tied in perfectly to complete the optimal euphoria for a gnarly concert-going experience.

The Afterparty Night One 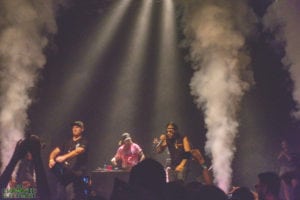 The Gothic Theater was the host for the Deadrocks after parties and for the first night, DNMO was one of the openers who rocked the crowd in a unique way. Offering future bass tracks mixed with grimy beats, he got the party rocking early. Jayceeoh followed him up putting out a different set that took trap lovers for a wild journey. He led the vibe right into Zeds Dead for complete annihilation. Bringing 1000 Volts back for an intimate experience, followed by some of the rawest music in the bass scene. The blasted us back to some of their first released music and also incorporated a beautiful variation of music from other artists such as The Widdler or Dimension. They brought the bass capital the best of bass, with dubstep, half time, drum n bass, and everything in-between. Check out this insane clip of Zeds Dead playing some beautiful DnB!

Chuurch came to Red Rocks for one hell of a holy groovy set. Yes, Chuurch. A duo from Canada that describes their music as Lean Bass. This electro/house performance set the vibes right as the party was in motion. Their first appearance in the states at Red Rocks, big things are truly coming for this talented duo. Another duo followed the Canadians, who go by the name of Um.., took over for a wonky hour of exotic beats that thrilled the deadbeats crowd. Offering a different vibe, Um.. brought the headbangers out for an exhilarating set. Keeping up on the pumped up vibes, 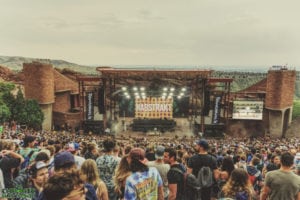 Habstrakt, turned Red Rocks into a Bass House party. His heavy selection of bass music matched the house melodies perfectly that equated out to a sold out-grooving Deadrocks audience. Eprom, brought back the exotic beats with the half-time and heavy bass selections. His mind-bending visuals matched the psychedelic music that he threw down.

Following the mind wreckage, ensued even more mind obliterating music with one of the original dubstep producers, and most iconic names in the scene. Rusko. After beating cancer, 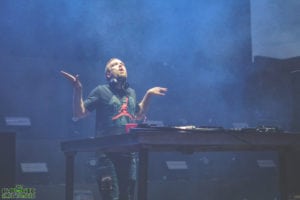 this goofy ‘brit’ who produces some of the nastiest dubstep came back stronger and livelier than ever. (Maybe its because of the dubstep, maybe its because he is British. Either way, he is looking better than ever with his radical dance moves.) His eccentric on stage energy radiated throughout all 10,000 people. Strolling through the crowd, you would hear either comments referring to the classic songs or his outrageously funny yet, on-point dancing. He had loosened the crowd up perfectly for the ending night of the 5th annual Deadrocks.

For the first time ever, Deadrocks had become a 2 night run at Red Rocks. With this, Zeds Dead did not go lightly. Obviously, they stacked the lineup up for both nights and with that, it brought out the best in Zeds Dead. When you think it couldn’t get more wraunchy and filthy than the night before, Zeds Dead just goes to surprise ya again. They had played tons of their music such as; Cowboy, Shut up and Sing, Fight of my Life, and Journey of a Lifetime. Also tied into their classics was some new new from one of the most talked about up and coming names, 1788-L. Released on Deadbeats, Zeds Dead threw down 2 news songs from the highly talked about artist. The first one can be seen below!

The End of the 2 Night Run 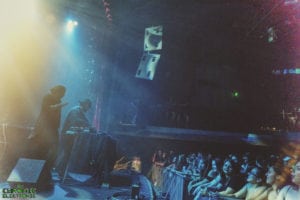 The second after party had chill vibes all over it as Chuurch took us into the realm of electro and house music. The duo from Canada played their “Lean Bass” in the intimate venue that was packed full. Their unique take on house music got the bass loving Zeds Dead fam grooving in anticipation for the filth. For the 4th set in two days, Zeds Dead did everything and more that a fan could ask for. From playing “No Prayers” into “I Don’t Care,” 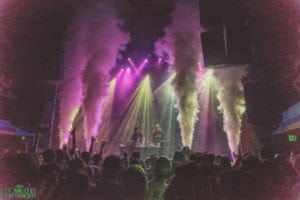 A prime example of bass love, and ending the show with “Too Young.”


The vibes were outstanding for the end of the legendary 2 night run in Denver. Again, showing love to the drum and bass fam, Zeds Dead played out some nasty DnB songs that riddled the Gothic with 160bpm stomping feet. This set had their heart poured into it and you could feel it. Watch this unique take and what they had to offer for their final set to their triumphant two night run.

In the bass capital with a world-renowned iconic venue, Zeds Dead had brought everything needed to make this years, Deadrocks the best yet. We hope to see another 2 night run of madness in the mile high next year!