Thursday night Badlands at The Church Nightclub in Denver, Colorado is home to various styles of dance music. This last Thursday we got an amazing taste of bright, future bass sounds sprinkled in with heavy dubstep grimes from Nurko and his support! The local artist Xonin kicked things off strong with high energy and gnarly dubs. Being in the Bass Capital, the heavy vibes didn’t stop with him. N3WPORT was direct support that night and he had an immaculate blend of heavenly melodic future bass that lead into nasty drops. He threw in heavy hits from dubstep artists like, Eptic, and he would blend it into his produced music flawlessly. (Be sure to check out his Soundcloud here!) As the room filled up to its capacity, he most definitely riddled the space with playful yet tense vibes building up to Nurko’s highly anticipated performance. 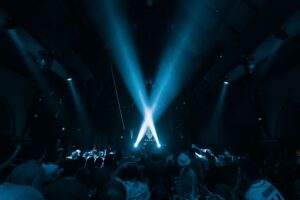 Once N3WPORT ended and the room went dark, the crowd lost it as Nurko and his Logo appeared infront of a dimly lit room. He kicked his set off with his song with Chandler Leighton – “Disappearing Now” that lead straight into a nice mashup with an unidentified trap song, showing that his set was gonna be far from just chill. Not much longer after that, he led into a song from Illenium and the crowd went absolutely ballistic. Over Half the crowd was repping artist jerseys from Nurko and Illenium. True fans came out to play that night and you could feel the energy in the room with the sing-a-longs, group head-banging, and the famous floor wobble from the Church Nightclub flooring. He didn’t just keep it to his produced songs that generated magnificent sing-a-longs, he played a couple of popular songs, some from even back in the EDM glory days that got the crowd absolutely lit, like the phenomenal remix of Avicii‘s “Levels” done by Skrillex. Nurko played nearly all of his hits and some sleepers from back in his early production days. It was a gem of a performance that truly branched out to his fans of all types, new and old. There is something about seeing an artist like him in a venue like the Church. The audio slapped, the community was amazing, and it’s an amazing location that came together for a night like no other. Do not miss out on future Thursday night Badlands at the Church and follow Nurko to see his upcoming performances!

Much appreciation and gratitude to GetIn PR who gave us this opportunity to cover the show.

*ALL PHOTO CREDIT GOES TO HOUSE PHOTOGRAPHER OF THE CHURCH NIGHTCLUB*