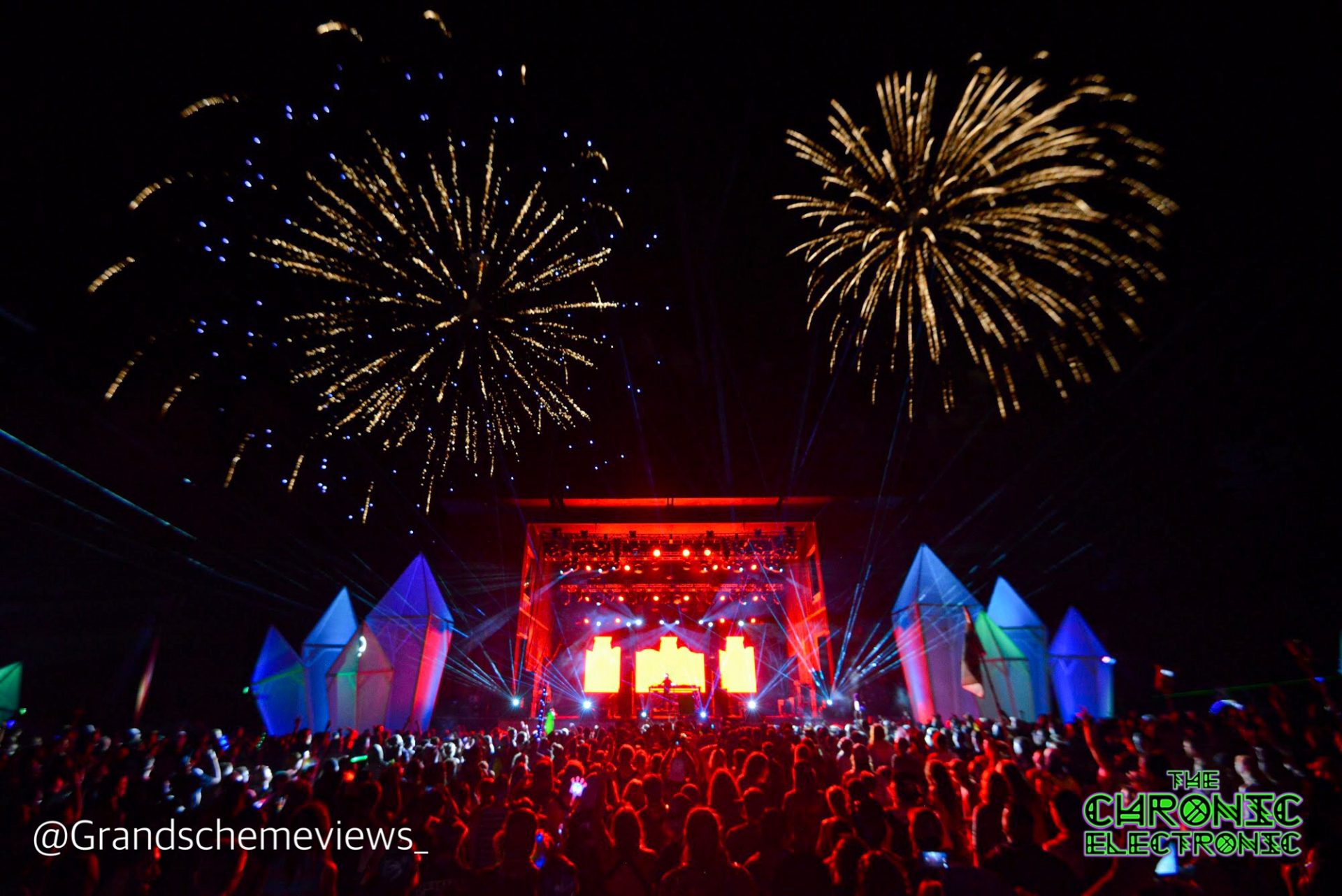 Now that Backwoods has come and gone, enough time has passed for me to finally process the entire experience. I also spent time gathering facts, as to present an honest review of the festival overall. I really digested the experience and thought about this piece for a long time, what I wanted to say and what I wanted readers to know. However, Backwoods really did become a very emotional event, which may have colored our opinions and I tried very hard not to allow that bias.

Although the helicopter crash greatly changed the festival in so many ways, there are things that need to be said about the festival overall, regardless of and completely separate from the crash. Backwoods had its share of highs and lows, of things that they rocked, and things that they could improve for next year. Mulberry Mountain deserves only to be a host of the best of the best, and that is what I want for Backwoods. With that being said, here is my personal list of the festival’s successes and improvements that should be made. 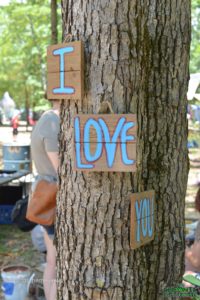 1. Overall “Festival Necessities” Aka Lineup/Venue/Stages/Production
The first thing about Backwoods that caught my attention was the initial lineup drop (however, there was a sort of lineup “leak” and as true or not as it was at the time, it was unprofessional and regardless of how it happened, it still should not have happened) as well as the second phase drop. The moment we saw that lineup, we knew we could not miss this festival. I have also had friends attend Backwoods in the past (in Oklahoma) and they constantly sang its praises.

The stages were spread apart enough to prevent sound bleed, but did not require miles and miles of walking. In fact, you could start at your campsite, wander to the main stage (with a walk through the wonderfully filled vendor avenue, of course), then make your way through the gorgeous and mystifying Nirvana Woodlands art village, make a quick pitstop at the CounterKulture stage, and finish up in a hammock at the aesthetically pleasing Aqua Station in honestly really under an hour (depending on your level of wander). Although, I will say it was difficult to hurry on this little trip as all of the attractions piqued our interest individually for some time.

As for its venue success, Mulberry Mountain is exactly as magical as I was told. The foliage, the mountains, the sky, and the fresh air, felt like…a breath of fresh air. The success in all of these factors really uncovers a lot about Backwoods, where its priorities lie and how much its curators care about the experience they are selling to attendees. Also, there were laser beams. Like a ton. If that doesn’t sell you on a festival, honestly what will? 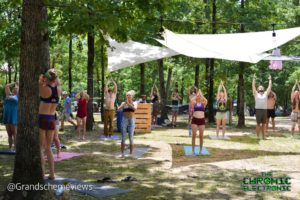 2. Community/Crowd/Vibes
Often when the venue is on point, so are the attendees. And when that venue is a magical plot of wilderness, the attendees are grateful and cherish where they are even more than usual. Mulberry Mountain is a perfect example of how that works. It was obvious to me that many Backwoods goers decided on attending simply for the fact that they just wanted to be back on the Mountain. The size of this festival allowed for ease of movement everywhere and everyone we interacted with was friendly and accepting. Mulberry Mountain creates bonds and makes a certain kind of magic that is not stumbled upon just every day.

3. (Some) Facilities
Personally, I found the showers to be heaven on the Mountain. They were normal festival prices, at $10 per use, there were never any lines, the attendants were friendly and efficient, and they were always clean and enjoyable. And with the smaller sized festival, they were pretty close to most campsites. Although I have seen some complaints online, I honestly found the porta-potties to be just fine. They were relatively clean every day, and I only waited in line for a few minutes ONCE at the main stage. I mean, a festival porta-potty is a festival porta-potty. Backwoods did a great job of maintaining these facilities and meeting our needs as attendees in general admission.

4. Vendors/Workshops/Art
Before making the trek to Arkansas, I studied the list of vendors. However, my expectations were shattered when we walked down that row to the main stage and came across the most glorious hippy shopping and eating outlet extravaganza I have ever been on! 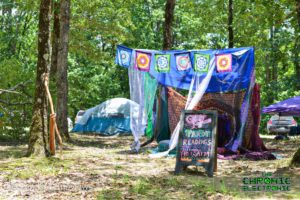 Artwork, clothing, accessories, beer, festival food, camping rentals, really everything you could ever desire (except, ya know, water). Even the venue general store came well-stocked for most forgotten camping essentials. And just beyond that, tucked away in the woods, hid the Nirvana Woodlands art village. Filled with trippy installations both day and night, the village felt like a mini Electric Forest of sorts. Interactive art pieces and workshops played a huge part in making this festival stellar.

1. (Other) Facilities
So, there is a lot to be said about the entire “water situation” this year at Backwoods. I am incredibly frustrated about it and I hope that enough other attendees have expressed themselves too so that Backwoods realizes that changes seriously need to be made if they host an event again. First of all, the festival pushed hard on leaving the Mountain clean, reducing waste, etc. They especially made a point in telling attendees to bring refillable water bottles. I FULLY support all of this and personally brought several refillable bottles. Now, when a festival literally tells you to bring bottles to refill with water, you do make the assumption that they will provide water (as any event/venue where thousands of people are congregating SHOULD do because water is literally required for survival). Of course, being a self-sufficient adult also means that you must take some responsibility into your own hands and bring at least some water.

Regardless, I searched the map given to us as we entered Mulberry. No water stations were marked anywhere. Fine, we asked around and eventually found one of them. On the water dispenser stand, someone had written in marker “Do not use currently” and some festival goers said the water was unsafe because of the nearby flooding. As someone who lives in an area that floods literally every year, I know that floodwater is incredibly dangerous and unsafe for consumption. So when there is flooding along with talk of unsafe water, you bet I am not drinking it. And to top this all off, the water coming out of the spout was, in fact, brown. Defeated, we stopped at the venue general store and figured we could just buy gallon jugs of water. But what did we really find? INDIVIDUAL BOTTLED WATER ONLY, for $2 each. What about a case? Forty-eight dollars, the clerk told us smugly. I have honestly never been more disgusted with vendors and their festival than I was at that moment.

And if that wasn’t bad enough, none of the vendors were allowed to sell water. Whether it be the festival or the venue, someone in charge monopolized the sale of water after knowing that their free water was, at the very least, questionable. I personally discussed and confirmed this rule with a vendor. But in further research, I was told that this is untrue and that they were permitted to sell water. If someone (vendors or the festival) is wrong, then that brings me to the next set of improvements that Backwoods needs to make; better communication and organization. If the vendors were wrong, then I blame the festival for lack of communication as the vendors truly believed that they were not allowed to sell water. Do better, Backwoods. Please find a way to improve your water facilities. 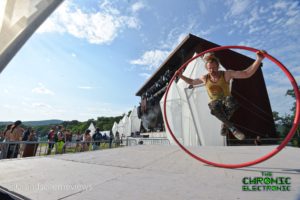 2. Overall Organization/Communication
In spite of its successes, Backwoods was absolutely the most disorganized larger event I have ever attended. Upon arrival, we promptly got into the security search line and waited our turn. For a relatively short line, it sure seemed like we were making no progress. After two hours of sitting in a non-moving line, we went up to the front of the line to inquire. Apparently, there were not enough staff members available to conduct searches. What?! Did the festival forget the number of tickets they sold when hiring staff? After another hour, finally, four staff members made their way through the lines and asked us if we had any glass or anything illegal. We said no and they waved us through. Obviously, everyone loves lax security. But there is definitely a fine line between keeping attendees SAFE and getting us through checkpoints more quickly.

I believe that signage could be improved as well. Part of the fun of festivals is the adventure behind finding the things around you and searching for what you want. However, it is frustrating when you cannot find a water station because it is not marked on a map nor are there any signs anywhere near the water. This was true for the medical tent as well. Both are vital to be able to find quickly, in my opinion. And if you needed to locate the lost and found, good luck. On Saturday night, an attendee asked the main stage gate attendant where it was, and he replied that there wasn’t one. Although I know lost and found existed somewhere, this is a perfect example in a way that the festival let attendees down as a result of its extreme lack of organization and communication.

Overall, the festival needs improvements with its basic organization, communication, and infrastructure. I do believe that at its heart, Backwoods has all the right priorities. But, this doesn’t mean that they can just disregard other parts of festival production. Backwoods has all the potential to be one of the greatest festivals, they just need to fix a few vital areas. I personally had a great time at Backwoods with my friends, however, I did leave the Mountain feeling slightly unsatisfied. I want Backwoods to show us how amazing it can really be; I have faith that Backwoods will recover from the tragedy, make the necessary changes it needs, and give us the music festival that Mulberry Mountain deserves. 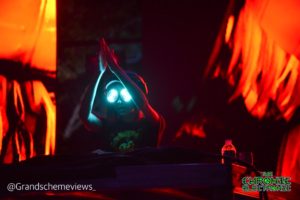 All Photos Shot by Joshua Andrews