One of the loudest shows to go on tour in the nation just came by Colorado for an astounding two night run in the bass capital that pumped out 225,000 watts of bass on the renowned PK Sound System. This distinction belongs to Excision‘s Apex Tour with the MASSIVE Paradox Stage Production. Of course, a highlight from this two-night run is the face-melting epic performances from the man himself, Excision, who also live VJ’s visuals for the ultimate performance. But this last weekend went further than Jeff annihilating the bass capital. He had it set up perfectly with one of the best support lineups possible for this dubstep madman.

On the first day, it began as HE$H kicked off the night. It didn’t take long for things to get really spicy as the starting sets were 45 minutes long but had plenty of time to make the headbangers rage the night away. Wooli took the stage quickly and led into a b2b that surely rocked the crowd. Sullivan King b2b Squnto, who both had solo sets the next day, absolutely blew expectations away by meshing the gnarly metal influenced dubstep along with some of the most popping and disgusting dubstep in the world. Together they mashed together sounds in ways a lot of dubstep heads have never even imagined. This led perfectly into the death step, 80’s horror influenced dubstep wizard, Figure. He had brought along a high energy M.C who rapped along with the grime in an ever mind-blowing away. The last support of the night might have taken the spotlight from the amount of unreleased music and new songs. Barely Alive b2b Virtual Riot absolutely obliterated the crowd. Check out this video of some new filth below!

A ten minute set up time after the b2b felt like forever but with prime intermission music from the sounds of Rezz and Dirt Monkey, the anticipation built up for the return of Excision and his Paradox stage. Taking no time at all, his quick introduction led into an hour and a half of straight nasty beats. He played an array of songs from his new album, Apex, to classic tracks like Headbanger and Africa. 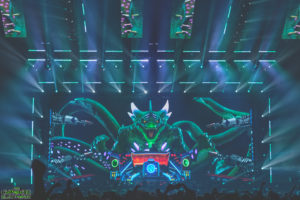 The new visuals he lined up and created were just brilliant. Robotic dinosaurs, talking & moving trees, beautiful fantasy landscapes, post-apocalyptic worlds and so much more creative visuals that matched the daunting dubstep. Check out a filthy clip from his performance below!

Night two had no ease on the grime either. From start to finish, the beats were nasty and unique. HE$H had started the night off again but this time a b2b with up and coming dubstep prodigy Al Ross. This called out to all the true headbangers which caused the placed to start filling up fast. Especially once Hekler came on, a new name for day two, the crowd had started losing their sh#t. Following Hekler was a much anticipated, Mega Chop set from the riddim master, Squnto. During this performance, the visuals change to trace the DJ board and visualize what he is doing with chopping and mashing up songs. Check out a video of the chaos here!

As Squnto had his own solo set, so did Sullivan King.  A purely metal influenced dubstep set that held some new songs of his along with some of his favorite tunes that came together for a set of immense adrenaline. The last support of the night was a wobbly and saucy one as he brought the goofy out in everyone. Spag Heddy of course! This brilliant dubstep producer has changed the ways we perceive heavy dubstep music, adding in wonky and out of the box sound samples, Spag Heddy, had a set that completely stood out from the rest of the support line ups. Which had all led up perfectly to the finale of the night, the second performance of Excision.

Throughout his set, he had played even more songs off his Apex album and a different selection of classic songs that definitely touched the hearts of the dubstep filled arena. 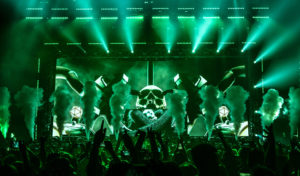 He never disappoints in the bass capital and for this massive upgrade on his Paradox production he blew away all expectations and delivered a performance that will resonate forever with all attendees.

We want to give a huge shout out to Chase S of BEN After Dark for helping us get coverage night two. All media from night two is from Chase Sexton.