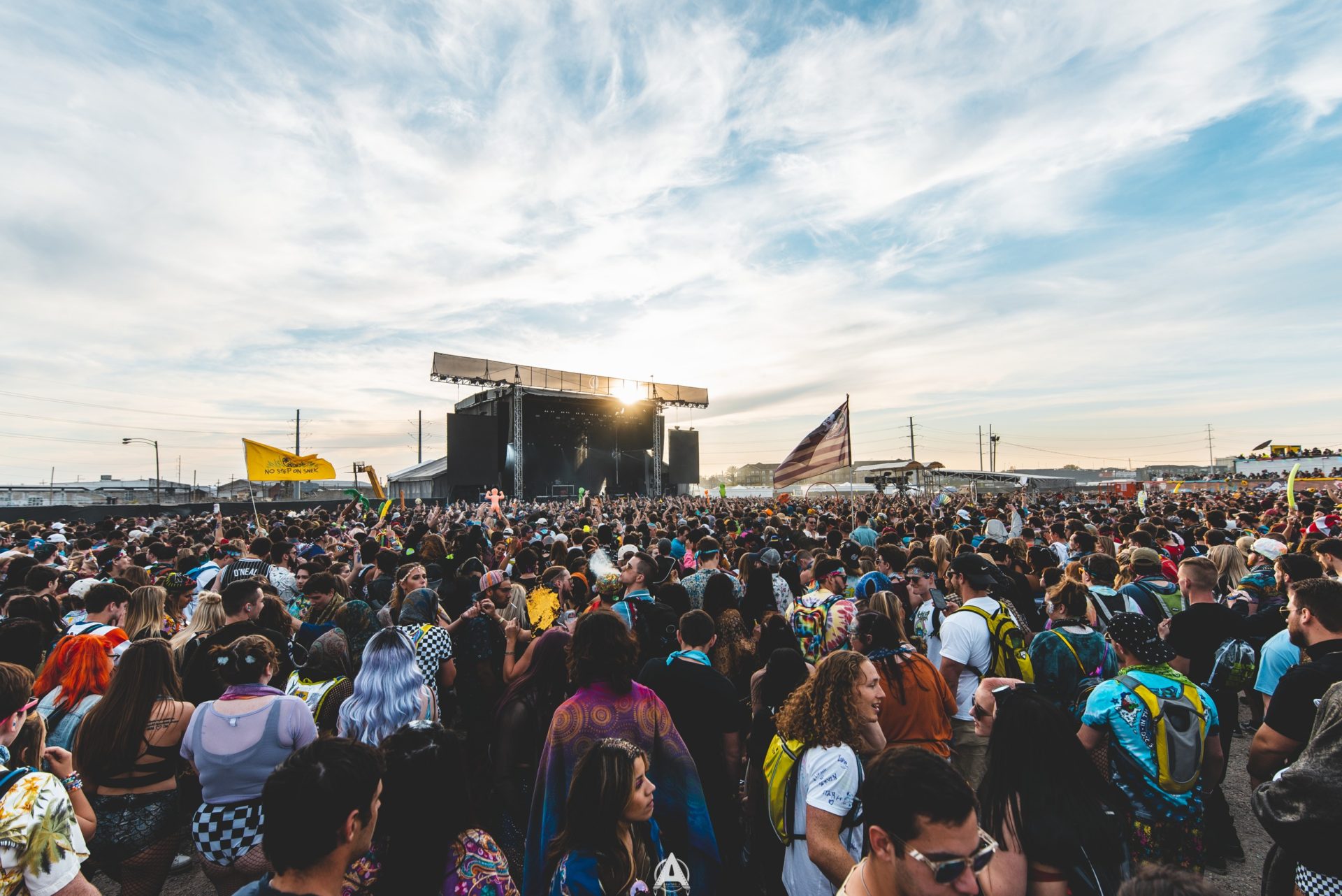 1: great in quantity or litness ;

2: creative, free-living life- style embodied by the dopest fans ever. 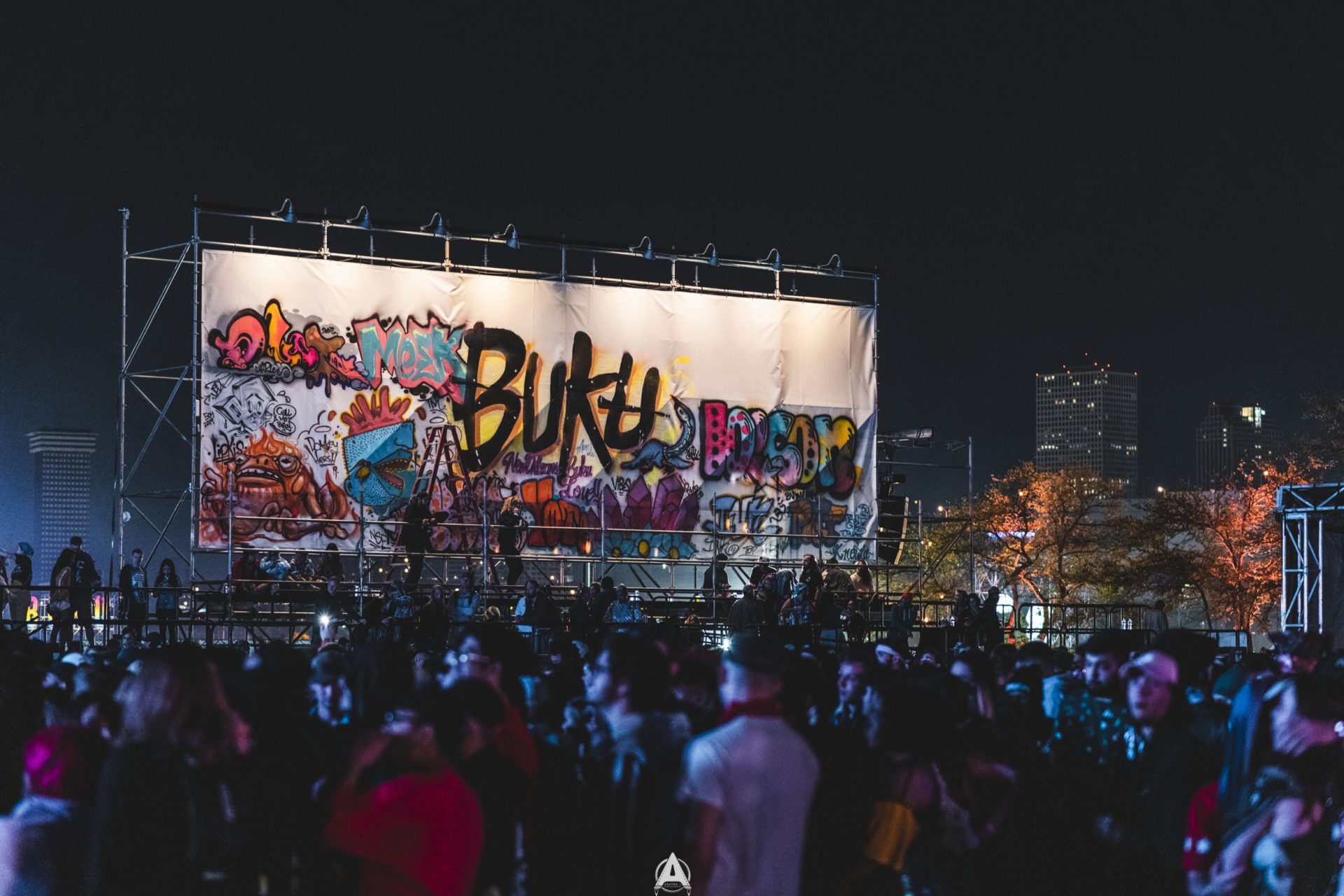 Festivals, they are more than just the music. More than “a party”. They are more than a conglomerate of talented artists traveling to the same city for a weekend to do their job. These events are a chance to disconnect, explore the unknown, and ring in new experiences with your closest group of friends or a complete stranger. These events give you the chance to take yourself away from the busy schedules and deadlines that loom over you on a week to week basis, and to immerse yourself into a place of creativity that is constantly growing within itself.

What better place than New Orleans? Creators flock to this city to pursue their aspirations – musicians, artists, chefs, writers, photographers – you name it. Massive murals and street acts boasting at every turn just waiting to capture the attention of the New Orleans local or the out of towner. It’s a welcoming town, and that’s why it makes all the sense that Buku Music + Art Project lands on the grounds of Mardi Gras World next to the roaring Mississippi every year.

So about the festival – Industrial meets electronic meets hip hop meets Second Line parade type of vibe. It is hard to explain unless you have attended. It is unique that is all that needs to be known – the culture and soul of the festival is strong. Stages such as The Wharf tower over the river, made from shipping containers, equipped with video screens, lasers, and occasional cannon of fire that blasts towards the crowd. Massive warehouse parties where Mardi Gras floats line the walls of the Float Den Stage like giant statues around attendees. Blank canvases scattered around the grounds that gradually bloom into graffiti artist masterpieces. Intricate sculptures act as meeting points and hangouts. The art is ever changing and evolving.

Buku brought together a stacked lineup for 2019. Names from ASAP Rocky, Dog Blood (Skrillex and Boys Noize), RL Grime, G Jones, Earl Sweatshirt, Getter and many more all gathered to the Lower Garden District to showcase their work to the eager crowds.

Kicking off things for Day 1 across the board was Peekaboo, Sunsquabi, and Toro y Moi – A dose of heavy with Peekaboo, some funk at Sunsquabi, and a little dance at Toro y Moi. Next up – the New Orleans electronic duo, SFAM, took the decks at the Float Den delivering a heavy bass, trap influenced hour long set. Meanwhile Grammy nominated artist, Paul Fisher, brought in the sunset across the way at The Wharf, while Excision drew huge numbers and gathered headbangers from all around at the Power Plant.

Day turns to night in New Orleans on Day 1 – the crowds become a sea of blinking LED’s, stages begin to explode in color, and art installations glow to act as beacons for festival goers. Ekali, Death Grips, 1788-L, Kevin Gates, Nghtmre b2b Slander, Tokimonsta all power through the night delivering high caliber sets. Friday closes out with a variety to pick from. Whether that be the talents of RL Grime, Playboi Carti, or Lana Del Ray. After closing sets on Friday crowds empty out and head into the New Orleans streets to continue the party or out to one of the many Buku Late Night Shows!

Day 2 is rang in by Papadosio in a fully packed Ballroom performance, followed by Earl Sweatshirt out at the Power Plant for all the Odd Future fan base to get their fix. Saturday brings sets from Liquid Stranger, Earthgang, J.I.D, Griz, and We Came As Romans as we head into the night. Over at The Wharf, with a fully packed crowd, Getter performed through his latest album Visceral. Beautifully mixing between the melodic beats that make up the album, along with showcasing newer tracks like his fresh Deadmau5 remix.

Now with the night young, A$AP Rocky joins in on the fun. Having been here before the hype is colossal. Chants for Rocky fill the area that makes up the Power Plant. The lights dim and a massive silhouette of Rocky takes center stage as he performs his opening songs, before revealing the Harlem superstar as the curtain that covered the stage falls to the ground. The crowd rocks back in forth with Rocky for a full hour and quickly make their to The Wharf at the end of his set, where the hometown heroes, Suicideboys, have taken the stage. If there were an award for crowd participation and overall level of entertainment, the crown belongs to those at Suicideboys. Mosh pits, walls of death, and screaming every word that Ruby and Scrim of the New Orleans rap duo spat into the microphone. 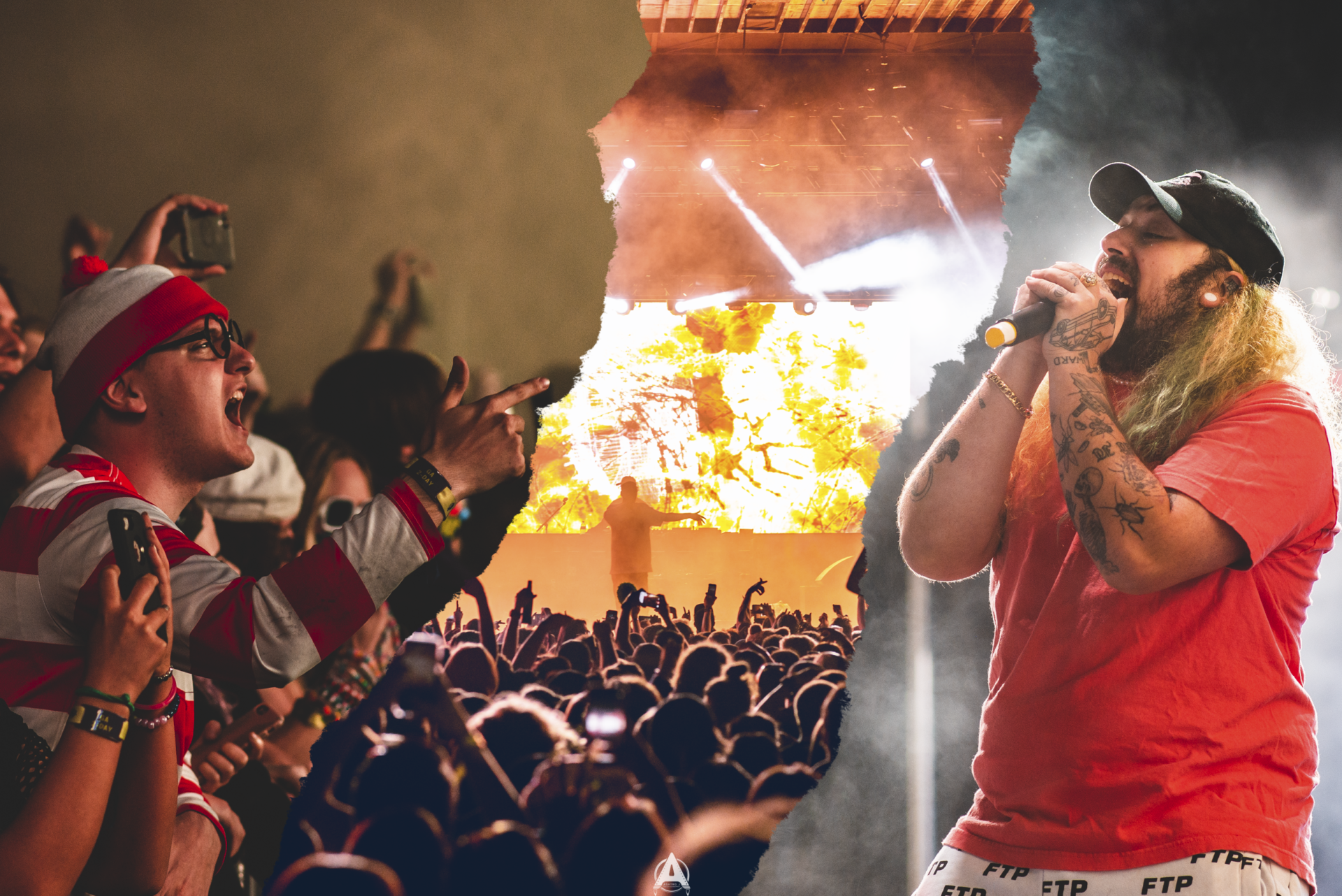 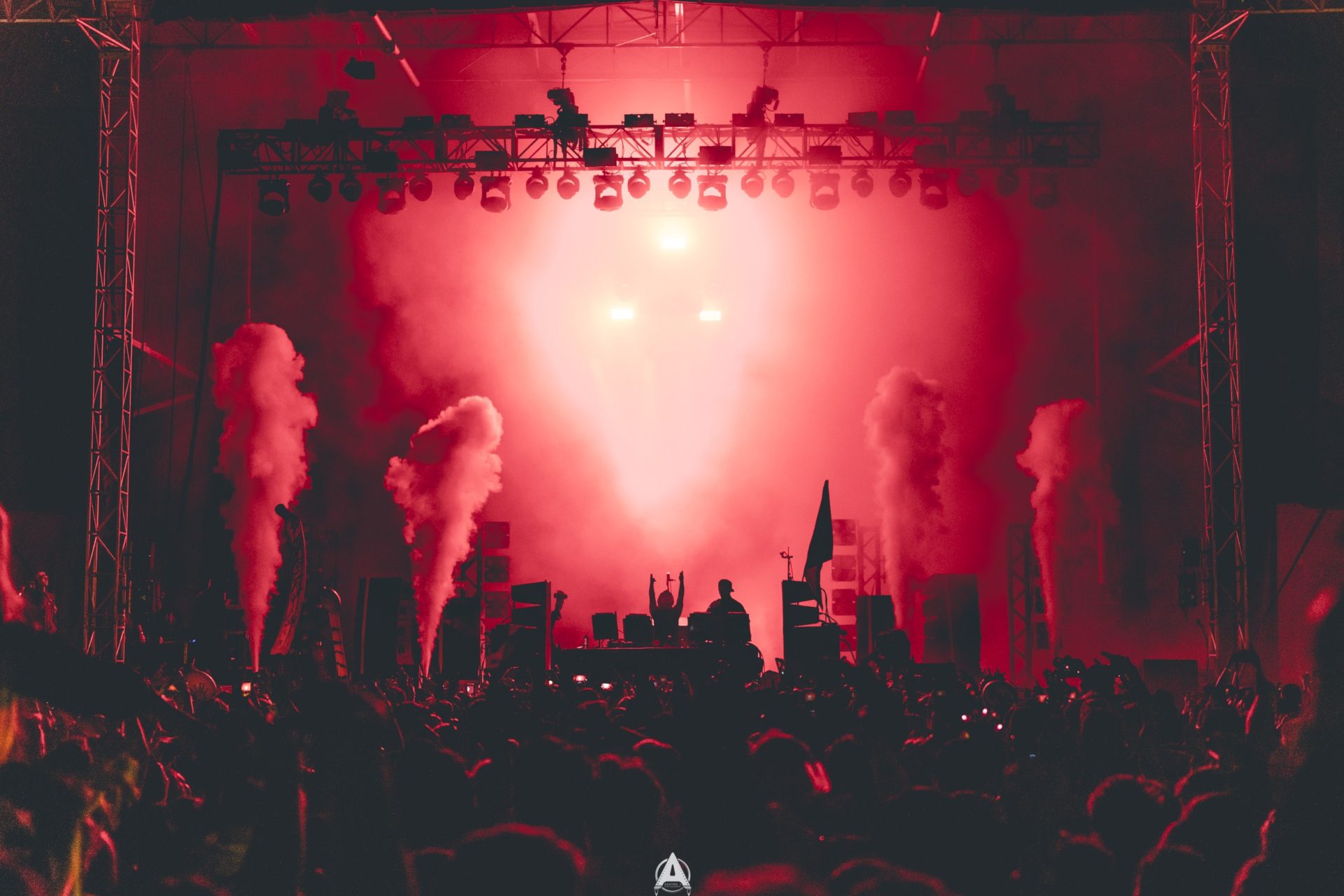 G Jones, Dog Blood, and Louis the Child. Three massive names in electronic music that finished out the weekend at Buku Music + Art Project. G Jones takes over the Float Den, bringing his production from The Ineffable Truth Tour to his first festival stop of 2019. Packed in like sardines the Float Den rides through the roller coaster ride that is a G Jones show – flashing cryptic visuals, in your face melodies, and all the monochrome. Over at The Wharf, Louis the Child draws in a massive crowd to finish up things near the river. The Chicago based duo ends out things huge with an appealing firework display admist all the production that The Wharf already possesses.

Finally, Dog Blood, another duo, this one only made up of powerhouse names known across the world, Skrillex and Boys Noize. Slamming out huge house influenced tracks with one of the most impressive lighting rigs I have seen to date. Lasers that mapped out geometric patterns behind the duo and that soared above the crowd, double exposed analog visuals displayed on LED screens, and all the energy that comes along with a Saturday night headlining set. The festival closes out by gathering all electronic fans to the smaller Switchyard stage, which lies across the field form the Power Plant, for a closing set from Mersiv that did surely did not disappoint. Surrounded by the now finished graffiti canvases from all the talented artists that made up the 2019 lineup, Mersiv lays out the final hour of music for Buku with great feedback coming out after the show.  A lot of hype behind Denver based project and excited to see what this momentum brings for the rest of 2019.

The festival ends with all the hype that was anticipated and festival goers head out to after parties or take to the streets just like the night before. High hopes are in the air for 2020 and what the New Orleans festival will have in store for its attendees. Flawlessly balancing such a great variety of acts that cover all bases of hip hop, indie rock, and electronic fans – Buku Music + Art Project stands out as one of the South’s and the nations most prominent music festivals to attend. 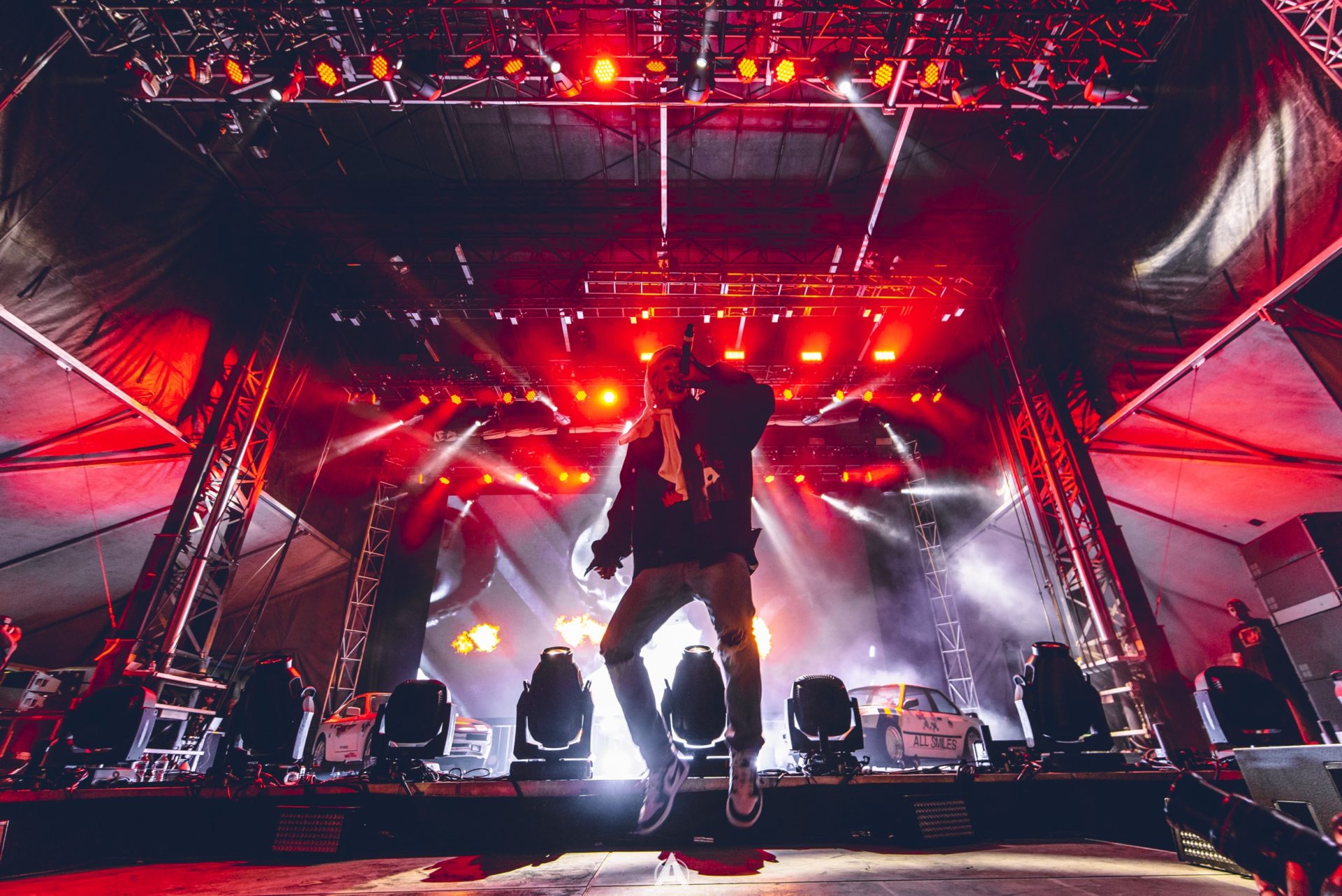