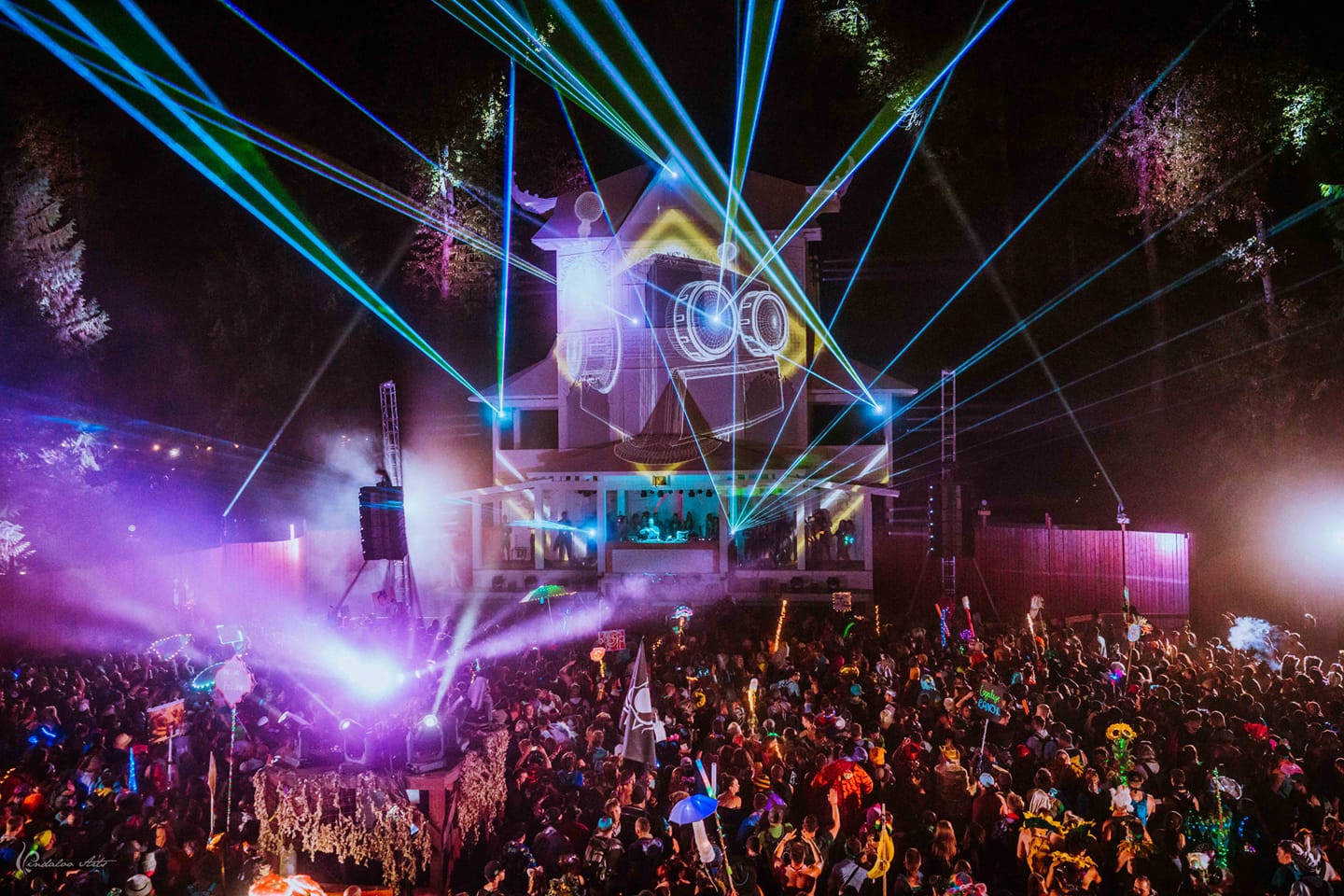 Recently, one of the more renowned music festivals in the world took place on a small farm in British Columbia, Canada. None other than Shambhala Music Festival. They have every stage, except two, that was loaded up with banging PK Sound, but even those other stages had Funktion Ones set up! Each stage was curated to a different and unique theme that hosted its own vibe. One of the stages, the Pagoda Stage, was essentially a big white house that had artist’s unique visuals projected on it. It was really phenomenal the sheer size and clarity of visuals. Some of the craziest animations that I have seen were on that house! And this year for his first official time, Defunk; a Canadian based, bass heavy, funkadelic, jazzy, producer took over the Pagoda and had his close friends and talented visual designers, Ben L. & Leigh P., rock the visuals on the massive stage with animations such as the FUNKBOT! Check out Beama Visuals Environment for fresh visuals! We had the opportunity to sit down with Logan Shea of Defunk and break down his backstory of the festival. He has been coming to Shambhala for around 8 years now, several of which included duties such as volunteering/stage work and performing at Fractal Forest for a couple of years. He got the LEVEL UP opportunity to where he was able to performe at the Pagoda and with such a juicy time slot! As Kursa was right before him and Adventure Club right after, which together led into a whirlpool of fan bases that got funked up! Check out our Exclusive interview with Defunk below! 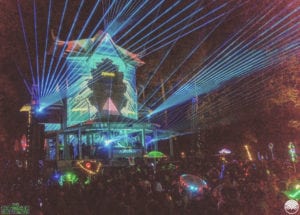 TCE: How long have you been attending / performing at this festival?

D: Around 7 years! The first two years I came as general attendance, exploring the festival, I knew nothing about it. I was wide eyed and brand new to the whole festival scene. Then I started to volunteer for a couple years at Fractal and Pagoda. Got on to the stage crew for those areas for a little bit and worked my way up from there. That lead me to perform at Fractal Forest for four years and that’s where it started for me at Shambhala.

TCE: Who are some of your musical inspirations?

D: I grew up listening to lots of different kinds of music from the 90’s, a lot of punk, grunge, rock, stuff like that. Earlier on it was guys like Sublime, Tool and Marilyn Manson, just weird edgy kind of music like that. And then I started getting into electronic music, and I enjoyed artists like Pendulum, Prodigy, Fatboy Slim, Crystal Method, A lot of breaks kind of stuff. That was a lot of my earlier inspiration stuff and now there are just so many artists out there, the variety is vast but some of the bigger artists like Pretty Lights and Bassnectar are inspirations [of mine.]

TCE: What are one of your favorite sub-genres to play, like when you play it the crowd just goes nuts?!

D: I love the “Half Time” genre- it’s the same tempo as drum and bass but it has half the snares and so it creates this really cool hip hop feel to it and usually accompanied by dirty bass and it can get really weird too. Artists like; Ivy Lab, Eprom, Alix Perez / Shades,.. even Bassnectar is getting on that half time stuff.

TCE: Actually kinda related to that, the artist on before you on the Pagoda this year is an artist who is really into the half time realm. {Kursa}

D: YEAH YEAH! Its really cool actually, Kursa is a good friend of mine, we have been friends for a couple years now and I may or may not be getting him to do a remix of one of my songs in the future. He’s making really amazing music especially in the half time realm. It’s just kinda fresh right now, it’s really dirty and you can go into a lot of genres from that point and transition into a lot of different tempos. I really like that!

TCE: This is your first time performing at the Pagoda stage, that is massive! How do you feel about that?

D: Well actually it is partly my first time playing Pagoda for my first time. I was actually given the opportunity for a fill-in spot a couple years ago during the day, it wasn’t officially mentioned before. It was kinda during the festival, it was really crazy because no one knew it was going on, I mean I barely even knew that I was going on that day. But, having the first official performance at the Pagoda is pretty wild because for a while that was the main stage at this festival – Its got a huge impact when you see it, it a very beautiful, very large, very breath taking stage and I am just honored to be able to play on it.

TCE: Who are some of your favorite sets that you have seen on the Pagoda Stage?

D: Hmmm, What So Not was really good! He played a couple years ago, love his music. Saw Bassnectar a couple years ago… which was really cool. And when Skrillex was first blowing up I saw him at the Pagoda stage and it was cool cuz it was fresh. I have a lot of respect for Skrillex and what he does. Other sets; I saw BTSM, Rezz, Mija, so theres been a few epic ones and Pretty Lights which was insane!

TCE: We were curious on the instrument you use, which is like Half Keyboard – Half ??? Can you give us some insight on that?

A: Yeah definitely it is called a Roli Seaboard – I believe it was co-created by one of the keyboardists from Dream Theater, which is like a very Prague type of metal band and they put together a really cool product being a hybrid of Keyboard to … I don’t even know what the equivalent would be. It’s got this gel substance to it – it is one long midi trigger essentially that has a bunch of different points, its graphed out, so you just slide between those points. So how you slide between those notes actually creates interesting sounds and portamento and pitch bends between some of the notes. So you can actually use it for things like guitars or saxophones and get some really nice vibratos and really cool organic pitch bends and transitions between notes. It’s a fully integrated midi keyboard, so you can load up any sound. Can load up your synths. I use some of my synths from production and play those out live, to kinda give it that extra layer and just play around it. Its really cool.

TCE: I jam out hard to your Funk Trunk Mixes and just recently saw you post a new one after stopping the series for a while, so is that something that you will be bringing back?

D: Biggest thing with those, is that I try to play out some of music that I’m working on at the time as well as the music that I’m interested in and the stuff that people recognize from me.So for a while there I was putting out really big mixes, There was the Pretty Lights mix, the All Good Radio mix, Shambhala.. there were like 4 or 5 big ones in a course of a year and I essentially ran out of new music to put in those mixes, I was focusing on these other ones, so thats why I kinda stalled with those. I wanted to get back into them, they are fun, it gives me an opportunity to test out new waters and try out new things and see how people respond. I like having mixes to throw in the car or play at the gym or what ever, it is really nice to have something that flows for 45 minutes to an hour. Just keeping it fresh and I love trying new things and hearing new music come out all the time. 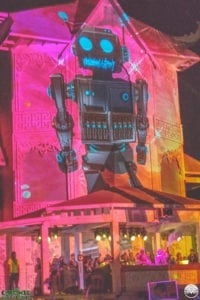 TCE: I have a friend who is NOT AT ALL into our scene, but I put one of those on when we drove through the mountains and she was ALL ABOUT IT! She loves it!

TCE: Yeah! It’s definitely universal. A lot of people can appreciate it, its not too abrasive, its great everything(?).

D: Yeah its a little bit of everything. hits all different types of markets. And a lot of different niches for people. And I guess that is one of the major things that I am proud of from my style of music that I fit under..because it can bring in those folks who don’t listen to bass music because it has those elements of jazz and blues or funk or what ever and its pretty universally reaching out to a big audience.

We wanted to give a massive shout out to The Confluence and Defunk’s Press Team for being able to present this amazing opportunity to us! Defunk is the man and we are beyond grateful to have had this sit down with the man himself at Shambhala! Follow our page closely as in the coming week we will have our exclusive festival review be posted! *Check out some of the funky filth from Defunk in the video posted below!*

Also, tickets are on sale today, September 4th! Grab them up FAST as they are expected to sell out!