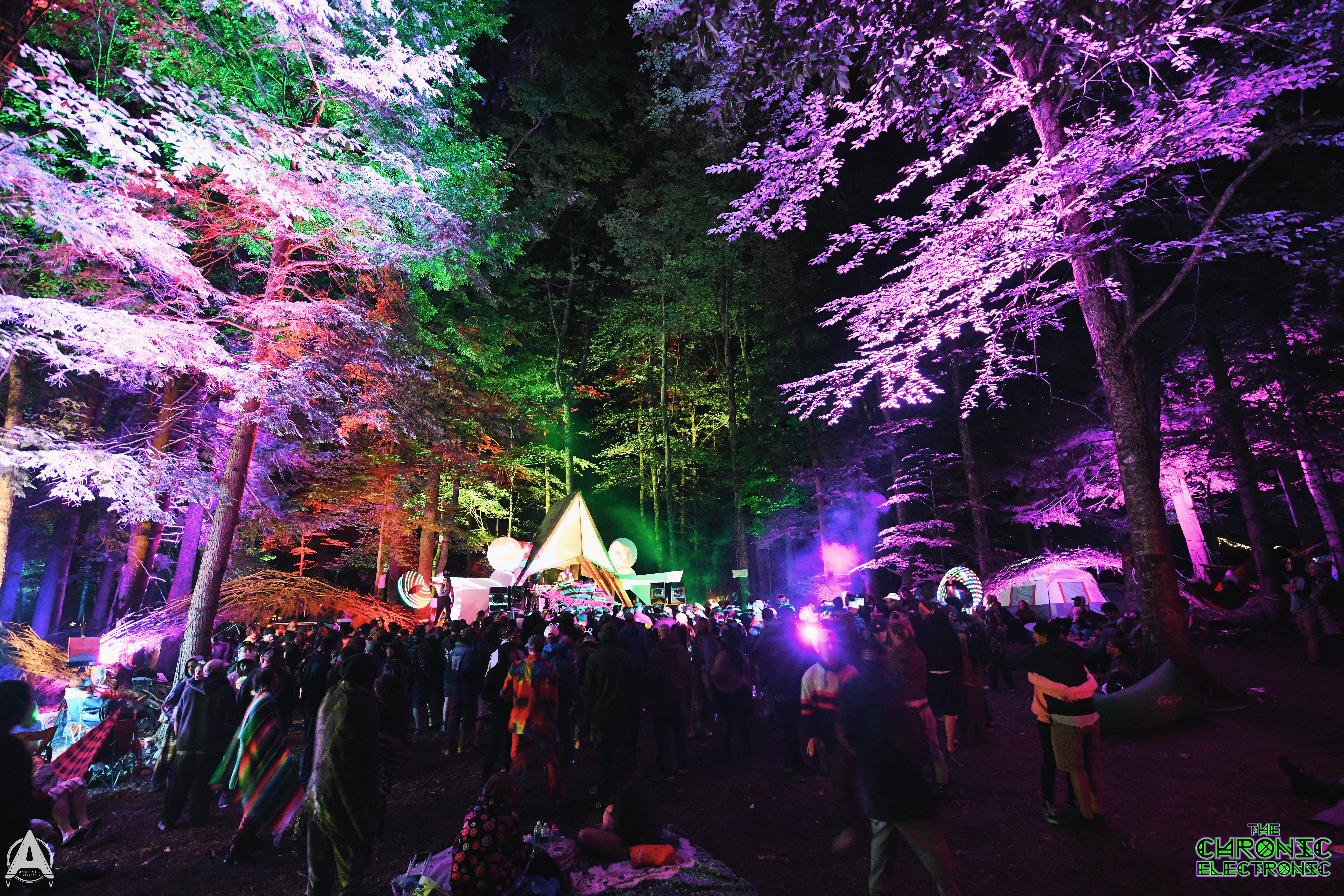 We at The Chronic Electronic had the great pleasure to attend Disc Jam Music Festival for the first time. We had high expectations as Disc Jam is known to be one of the more invigorating small festival experiences on the east coast. Ashton Johnson and I were filled with anticipation as we set out on our long journey from Birmingham, AL to Stephentown, NY. The festival took place June 7-10, 2018 during one of New York state’s most beautiful times of the year. This created an exciting drive leading into the festival as you’re surrounded by lush forests and curvy back country roads. Stephentown, NY is a quaint little town that gave a very peaceful aura with its old architecture and a welcoming environment.

The venue is absolutely breathtaking as rolling mountains, thick woods, and a flowing river surround the campgrounds and stages. Also, Disc Jam’s planning team did an excellent job laying out the festival. Nothing was too far of a walk from each other allowing attendees to navigate the festival grounds with ease. The food and vendor selection at Disc Jam was excellent and were located directly in front of the main stage. This way you could keep grooving while grabbing a bite to eat or getting new festival gear. The many different food options along with some very creative vendors gave everyone an option for their liking. 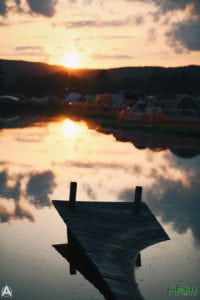 Disc Jam adds another unique element as the festival also hosts a disc golf tournament presented by Innova Disc Golf. With both amateur and professional par 3 tournaments, this gave attendees an added experience for the weekend. We were able to follow some of the athletes as they competed in the tournament and were very impressed. It’s aspects like this that make Disc Jam stand out from the rest of the festivals. 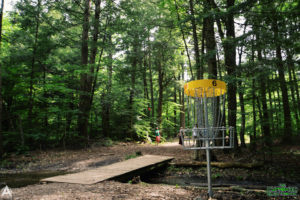 From the 6th Hole

Day 1 began with attendees flooding into the campgrounds eager to begin the weekend. With tents popping up and drinks starting to flow it was time for the music to begin. The festival started out with acts such as Cypher, The Mushroom Cloud, and Leila kicking things off. The first set we were able to catch was Gnome Project. They started the festival off great for us with spacey upbeat jams that gave a let loose free-living spirit. Aqueous followed up with an Enter Sandman opener that immediately caught the crowd’s attention. Their technical style mixed with some heavier jam sections was a nice change of pace compared to your average jam music. After Aqueous we made our way towards the electronic-based Woods Stage presented by Third Eye Tapestries powered by Hennessey Sound Design. The Woods Stage artists were curated by Rezinate for the day and came in heavy with the artist selection. Our favorite artists for the night included Esseks, Chee, VCTRE, and Keota. These sets stood out as their mixing style and sound design were clear focus points when arranging their performances. The experimental sound design seemed to be the theme of the night and all artists delivered. Shout out to Rezinate for curating such a monster lineup for night 1 at the Woods Stage. 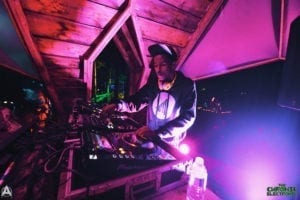 As the morning approached campers were awoken by the crisp New York air and a sea of fog forming a beautiful sunrise. The second day of Disc Jam can only be described in one way, FUNKY FRIDAY. It was clear Disc Jam’s goal was to bring on the funk as artists such as Brandon “Taz” Niederauer, Kung Fu, The Motet, and Galactic took the stage. As always, the highlight of the day for us was Brandon “Taz” Niederauer, as he continues to drop jaws with his incredible talent at such a young age of 15 years old. The rest of the bands brought their style of groovy funk to the crowd leaving the main stages a straight dance party all day. The Woods stage theme for the day consisted of immersive house vibes continuing the dance party. NV Concepts curated the stage for the night and brought some of the best talents in the house scene. With acts such as Hot Potato Band, Dateless, Golf Clap, Ardalan, Kill Frenzy, Christian Martin, etc. NV Concepts did a great job picking artists to keep the crowd grooving. Our highlight for the night was Golf Clap’s set. The mixing of a variety of house bangers so flawlessly was something we wouldn’t forget as we headed out for the night. The last show of the night for us was the highly anticipated DJ Logic and Friends jam session. The members consisted of DJ Logic on the decks, Rob Compa (Dopapod) on guitar, Eli Winderman (Dopapod) on keys, Marc “Brownie” Brownstein (The Disco Biscuits) on bass, Michelangelo Carubba (Turkuaz) on drums, Greg Sanderson (Turkuaz) on tenor saxophone, Josh Schwartz (Turkuaz) on baritone saxophone, Chris Brouwers (Turkuaz) on trumpet, and Shira Elias (Turkuaz) on vocals mixed with some interesting added sit-ins. It was about as interesting of a show as you can get regarding a super jam. We liked to describe the set as “scratch hip-hop jam”. This was a HUGE highlight for the festival as shows like this are very unique and hard to come by.

Brandon "Taz" Niederauer has been the talk of 2018 as the youngster continues to further his career at a ridiculous pace. Introduced as a "living legend" at Disc Jam Music Festival everyone needs to keep an eye on this one!Photography: Ashtro J Photography

Posted by The Chronic Electronic on Saturday, June 9, 2018

Waking up we were beaming with excitement as today’s lineup consisted of many of our favorites. Disc Jam SOLD OUT for the first time in the festival’s history with over 4000 tickets sold! With headliners Lotus and Beats Antique scheduled for today, as well as the Woods Stage being dubstep themed for the night, we at The Chronic Electronic geared up for an amazing day of music. We focused on the Woods Stage for the day as Sermon curated the artists bringing out the best new talent and OG legends in the dubstep scene. New talents included DiCE MaN, Eazybaked, and Sayer, all of which delivered very unique sets that showcased their sounds to the fullest extent. The OGs came in heavy with sets from Tsuruda B2B great dane, Joker, and DALEK ONE B2B DistinctMotive. These three sets were one after the other straight BANGERS, easily our favorite portion of Disc Jam. Joker, the OG UK legend, was our favorite set of the weekend as he blended a nice mix of classic quality dubstep throughout his entire performance. 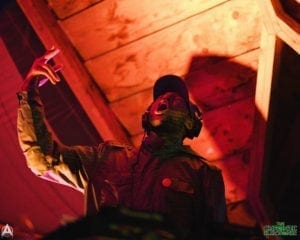 Joker bringing the hype on The Woods Stage

While we focused mainly on the Woods stage, we made sure to not completely miss out on the incredible band’s Lotus and Beats Antique. Beats Antique performed an amazing sunset time slot, bringing their electrifying stage presence and unique sound to Disc Jam attendees. With immersive crowd interaction and a refreshing new sound to Disc Jam, Beats Antique brought the sun down in superb fashion. With Lotus being the lead headliner, the crowd packed in preparing for the acquitted jam bands performance. Bringing their upbeat spacey electronic jam style the crowd was raving as Lotus jams were filling the airwaves. It was clear that these amazing headliners brought the crowd leading to Disc Jam’s first sold out year to date.

Beats Antique bringing the sun down 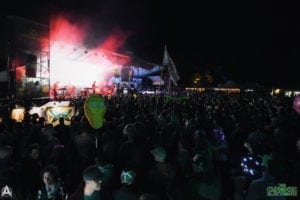 Unfortunately, due to our 17-hour drive back home and boring reality responsibilities we had to leave Disc Jam a day early. But massive shout outs to the rest of the artists performing for the day and The Rust Music for curating the awesome lineup for The Woods stage on Sunday.

In conclusion, we had an absolutely amazing time at Disc Jam Music Festival and highly recommend this event for the following years to come. We hope to be back at Disc Jam next year and will be looking forward to seeing what is in store next year.