Today is a very special day, to some it’s Valentine’s day, but to us who crave nothing more than being under the Electric Sky once again, today is the day the line up gets announced. The marketing team from Insomniac records did an unbelievable job this year, having Pasquale announce the theme for kineticFIELD is kineticLOVE on the most romantic day of the year. Along with that the masterminds sent out special packages to people of importance containing little heart candies with the names of some of the artists that will be performing this year! Social media has already blown up hours before the official line up arrives, with huge names being confirmed such as Rezz, K?d, Kaskade, Eric Prydz, Snails, Hardwell, and the list just keeps getting better.

Tune in for the official drop that came through live on Nightowl Radio – #130. Nightowl radio is Insomniac’s radio show with the founder of the production running it all, Pasquale Rotella. He brilliantly mixed together snippets of artists who are going as the way to announce the 2018 lineup.

Not only did he announce the artist’s for this year but he announced new themes for the stages, re-designs, extended hours, camping (for the 1st time ever) and even a new stage! The new stage is the house stage with all types of music going on. Check out the video of the livestream below and the artists announced through twitter. The official graphic with the lineup for EDC will be released tomorrow.

Make sure to grab tickets for Under the Electric Sky

Here are some snapshots of the lineup not divided by stage 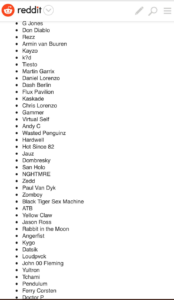 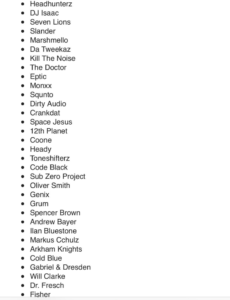 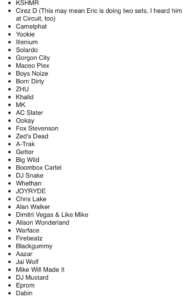