Temple Denver had their first annual Black Friday Party and it absolutely blew up! They brought in a duo from the Netherlands that go by the name, Vicetone! Some true OG’s in the house music scene. Coming from Europe, the home of house music, Vicetone has had some crazy influences on their music. They have released music on Protocol Recordings, Monstercat, Spinnin’ Records, and more! Vicetone has not only played the big festivals such as EDC Vegas or Ultra Music Festival (Miami & Europe) but they also produced the single, ‘United we Dance’ for the after movie for Ultra Miami ’14 and released it on Ultra Records. These guys have earned their reputation and having them come to the Mile High to tear shi*t up was a complete honor to witness! 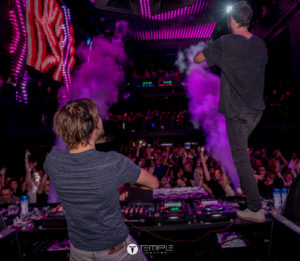 They grazed the ‘mainstream house music’ by mixing it with underground deep house and electro. This combination was perfect for club goers of all types, as they played popular songs that had the ultimate feels and they would remix such a happy and positive beat! Such as their remix of Bob Marley, “Is this Love.” This duo is full of energy and the passion to put on the best show possible. With nothing but love, Vicetone took over Temple Denver and transformed the vibe into a euphoric experience like no other! Check out some of their music below (such as their remix of Bob Marley, or one of their recent releases, ‘Collide.’) Along with ways to connect to Temple Denver and Vicetone.