From February 3rd-5th 2017, Gem and Jam Festival in Tuscon, Arizona will be hosting their 11th annual event. This festival hosts talented artists ranging in multiple genres from all kinds of electronic music, to instrumental acts, and bands. The music variety is vast and with three stages, it gives you leeway to experience new music constantly. While traveling between stages there is nothing but art to see. Whether it is by live painters on stage or in the crowd, or by some of the creative and unique art installations that can leave you questioning its physics for hours. That’s not enough? When watching some of your favorite music, there tends to be extremely impressive performers on stage pushing their skills to the max. While they are flowing to the music, the LED screens in the background explode with art from skilled visual artists such as Chris Dyer and Johnathan Singer. There is literally art and creativity everywhere you look. With this year being in a new location, there is a huge increase in space, thus resulting in “more room for activities!”

I was able to get an interview with Co-Producer of Gem and Jam Festival, Josh Pollack. For a sneak peak of what 2017 has in store, check out this interview and the 2017 lineup below for all types of juicy information! 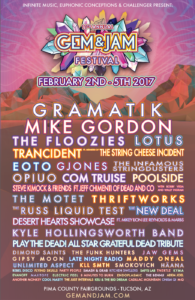 Haven’t gotten tickets yet? Pick them up at this link! Gem and Jam 2017 Tickets!
Gem and Jam Facebook
Gem and Jam Website

1- This being your 11th annual Gem and Jam, is there anything new that is being done compared to the previous years besides location?
Yes, tons of new elements in store for 2017 and can’t share all of the surprises quite yet. This is the first year that we are a full on camping festival, where as in years past lodging has been mostly limited to hotels. Also, the 2 main stages will not have any overlapping music, and the late night music programming is all on site. We also ramped up our music lineup to feature more diversity, and live acts that jam, while blurring the lines between live and electronic.

2 – I know that one new change is that the location is different than all the previous years. Why the location change? After the last 2 years we felt as though we’d outgrown our urban venue and had been looking for a more expansive space where we could offer on site camping in a more natural setting. We are thrilled to bring Gem and Jam to Pima County Fairgrounds and feel as though its the perfect fit.

3 – Can you give any extra info about the new location? Campgrounds? Size?
Yes, the Pima County Fairgrounds have hosted acts like Phish, Metallica and Carlos Santana in addition to one of the Arizona’s annual county fairs. We will only be using about a third of the usable venue space this year, which means lots of room to grow! Also, we can accommodate over 2,000 campers plus a couple hundred RV hookups and boutique camping options. And if people want to stay at a hotel, theres quality cheap options less than 20 minutes away.
4 – The whole town of Tucson undergoes the biggest gem show in the world for two weeks. How do you feel about Gem and Jam’s contribution to the town of Tucson during this time?

Gem and Jam first started as a nightlife option for attendees of the Tucson Gem Show. Now, we’re seeing a lot of people coming from all across the US just for Gem and Jam, not necessarily for the Gem Show. We get to introduce them to the magic that is Tucson and its world renowned Gem Show. We love being able to bring new faces to Tucson, who maybe would have never been there before and hopefully they’ll leave with positive things to say.

5 – This year already has a massive lineup for phase one, what do you think will make this year better than the last?
Based on the musical lineup alone, that speaks for itself. We are thrilled about how it came together and have some more tricks up our sleeves Plus having a bigger venue with more space will let us bring in more art, installations and improve everyone’s overall experience.
6 – Out of all of the performances and musicians who came to Gem and Jam, who has been your favorite act?

Nahko and Medicine for the People really resonated with the crowd last year and put on an amazing show. Drum N Bass legend LTJ Bukem 2 years ago was a dream come true. The Purity Ring DJ set 3 years ago was a super unique addition to the lineup at the time and he really delivered. Also having Alex and Allyson Grey live painting and doing workshops for 4 years in a row was a treat.

7 – What is your favorite aspect about Gem and Jam as a whole?

That it is really a unique festival experience like no other, as the focus on crystal & mineral energy attracts people who are all on a similar vibration, which is hard to find nowadays. Also we really strive to keep Gem and Jam feeling like an intimate family affair.

8 – When at the festival, do you eat catered food or will you eat some of the vendors food? If so what are some vendors you would go to?


All of the staff enjoy eating food that the vendors provide. We’re working on bringing even more local, delicious and healthy options this year.

9 – What is your favorite gem?
For the past few years its been Labradorite.

10 – How do you think transformational music festivals affect our society and the individuals attending the festivals?
They provide a creative space for people to be themselves learn more and grow as individuals, and connect with other like minded members of the more eco-conscious culture that exists beyond the mainstream consumerism.

A Couple videos from last year