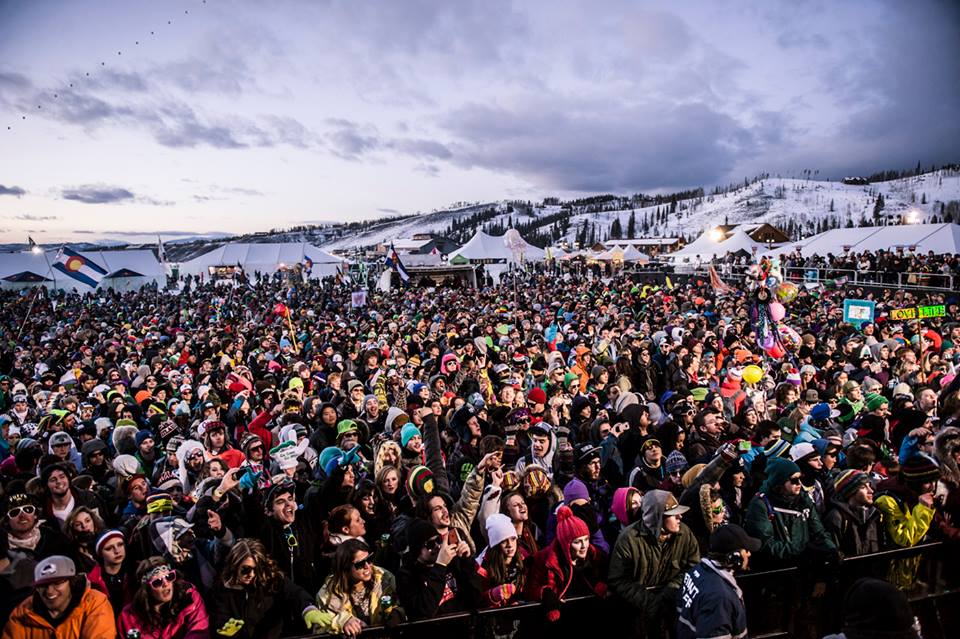 One of the biggest, most popular, and unique music festivals in Colorado has been forced to take a 2nd year off due to not finding the correct location for hosting their event in the mountains this year. SnowBall was planning for a strong return in the mountains March 2016 but because of what happened in the previous years, they have not been able to find a suitable location for the festival yet. I went to my first SnowBall back in 2013, the last year it was in the mountains, and let me tell you, that was something so special compared to when in 2014 they held it at the parking lot of Sports Authority Field in Denver. Both were amazing festivals, and I had a wonderful time attending both, but there was a major difference between the two years. Obviously it wasn’t in the mountains in 2014, therefor being in Denver the crowd had changed, not just because of attendance, but because of the weather. It was hotter and it was like any other festival in a city, and that affected the vibe of the crowd. I am not saying it was a bad time, I am just saying it was a completely different vibe than before and that is why I agree 100% with their decision of holding off again until they find that perfect location for them in the mountains where they have the true SnowBall vibe. Here is their official statement from Facebook if you haven’t seen it yet.

It is with a heavy heart that we can confirm SnowBall will unfortunately not be returning for 2016. Despite our best efforts and thorough exploration and evaluation of all potential options for a new home, we ultimately did not find a location that we felt perfectly synched with the experience and environment that is central to our festival’s spirit. Per your feedback, creating an authentic SnowBall experience remains our top priority, and until we find our perfect match we will wait to make our triumphant return.

Thank you for your patience as we work towards putting together our best SnowBall yet.”

Facebook Link to Announcement of holding off until they find the perfect Snowball location.

In this statement, they do not clearly announce why they could not find a location in the mountains, and so I am going to give you my honest opinion of why more then likely the mountain towns of Colorado did not accept SnowBall this year. It is because a select amount of people (quite possibly the majority of people sadly,) may have caused SnowBall a bad reputation by trashing these towns, both at the festival and in the town itself. From what I have heard in the year 2012 when it was back in Vail, at the end the town was trashed. The festival grounds were littered and it spread to the streets, and unfortunately it happened again in the year 2013 at Winter Park. I did notice how bad it was on the festival grounds with beer cans, water bottles, and disposable food carriers, but I did not notice how bad it was in the town because after the event we drove back to our hotel in Granby. But from several reports from local’s and other attendee’s, Winter Park got trashed in the streets… and it is because of this that mountain towns are not accepting SnowBall again. Or if there are mountain towns accepting to host SnowBall, it is not of size to hold the capacity that SnowBall wants. Here is a local from Winter Park’s view on the trash of 2014. Credit to Tim Leman

As SnowBall struggles to find the perfect location, one of the things we can do to help SnowBall find their home is by giving us a good name and reputation again by not littering and cleaning up after ourselves. It is not only disrespectful and quite literally trashy but it impacts the people giving us this opportunity to have a beautiful music festival. (I was going to be particular and say in the mountains, but lets be honest, we should clean up after ourselves everywhere, it affects every festival when there is an overflow of trash. Especially when it is held out in Nature, such as SnowBall.) SO PLEASE CLEAN UP YOUR TRASH, NO MATTER WHERE YOU ARE! Keep in touch for more updates by SnowBall and other major events around the state and surrounding area’s! Thank you for reading!